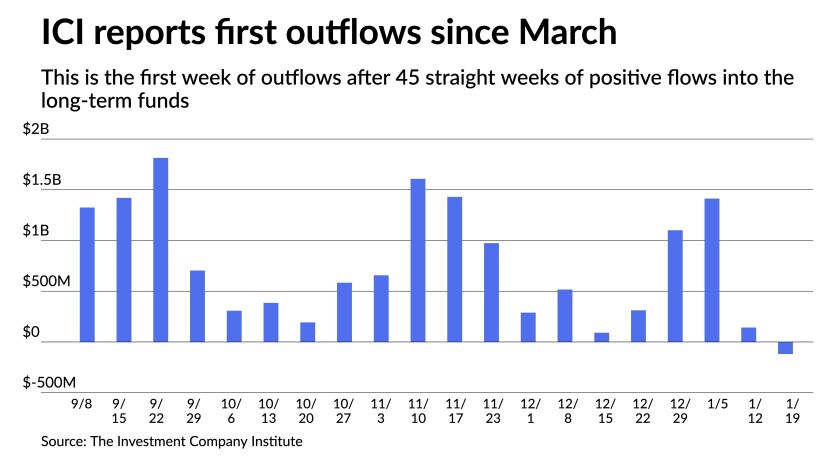 Municipals continued their ascent to higher yields Wednesday, even before the Federal Open Market Committee said it would “soon” raise interest rates.

“Powell’s seeming unwillingness to dismiss some of the more-hawkish scenarios for the path of policy this year, leaving all options on the table, is clearly having a negative impact on market sentiment,” said Tom Garretson, senior portfolio strategist at RBC Wealth Management.

Secondary trading showed high-grade state names trading upwards of double digits over triple-A benchmarks on bonds inside 10-years, but weakness was seen along the entire curve. Trading slowed to a trickle after the Fed news but muni activity throughout the morning into the early afternoon led to two to eight basis point cuts to scales, with larger cuts again up front.

The Investment Company Institute reported $119 million of outflows from municipal bond mutual funds in the week ending Jan. 19, down from $142 million of inflows in the previous week.

It marked the first week of outflows after 45 straight weeks of positive flows into the long-term funds. Exchange-traded funds saw inflows at a mere $1 million after $460 million of inflows the previous week.

A larger adjustment this month is taking place inside 2027 as munis react to USTs, correcting ratios as a result.

Kim Olsan, senior vice president at FHN Financial, noted that absolute yields in play in that range are indicative of a 10-year bond at the start of the month and short-end ratios have corrected 20 percentage points off recent lows.

“The extent of the current yield correction might be expected in March or October, when supply usually ramps up at the same time implied demand through redemptions wanes,” said Kim Olsan, senior vice president at FHN Financial. “But to happen in January — when the market almost always rallies — carries more weight.”

She noted, some yields have doubled on certain trades from their 2021 closing levels. A bids wanteds of Harvard University 5s of 2026 on Tuesday resulted in a 1.05% sale to a customer, nearly 50 basis points above its 2021 closing price.

“Participants in both primary and secondary markets will find some of the best entry points in years while issuers are still enjoying historically low rates,” she said.

Daily bid list volume remains quite elevated, with this month’s daily bid volume 47% higher than January 2021. Tuesday’s total was $1.2 billion, per Bloomberg data, “giving bidders unusual access to product at a time in the year when there are supposed to be more buyers than sellers,” Olsan noted.

It was the fourth time this month that bids wanteds crossed the billion mark. Bids wanteds reached more than $1 billion only twice in 2021, both times in February.

The factors contributing to the pullback “may not be so short-lived given the macro monetary picture, creating consternation for future commitments.”

“A move back toward the median yield would equate to another 25-30 basis point backup,” she said.

“Any effort to trade back toward the median yield would mean another 50 basis point adjustment from present levels,” she said.

Current trading is accounting for a tightening cycle — bringing on a bear flattener in the muni curve — a possible pickup in fund outflows and curve reallocations.

“In the prior tightening cycle that began in December 2015 and ended December 2018, the muni curve slope averaged 179 basis points, as compared to the current slope of 135 basis points,” she said.

The primary was busy Wednesday, atypical for a market that usually waits until post-Fed days to price bonds. However some analysts said given how rapidly rates are on the rise, it made sense to price deals sooner.

Treasuries sold off after the FOMC news and equities were mixed to end the day.

In his post-meeting press conference Fed Chair Jerome Powell elaborated a bit but said the panel hasn’t discussed if a 50 basis point increase in the fed funds rate target could be appropriate or the exact timing and pace of balance sheet runoff.

“With inflation well above 2% and a strong labor market, the Committee expects it will soon be appropriate to raise the target range for the federal funds rate,” the statement said. In his post-meeting press conference, Fed Chair Jerome Powell said, “The committee is of a mind to raise rates at the March meeting” if economic conditions are appropriate to do so.”

“The Fed is on track to raise rates at the March meeting,” said Subadra Rajappa, head of U.S. rates strategy at Societe Generale, “but concerns over the pandemic remain,” especially the potential for a slowdown related to the Omicron variant.

The balance sheet reduction principles say it will start after liftoff and will occur “over time in a predictable manner primarily by adjusting the amounts reinvested of principal payments received from securities held.”

Powell would only commit to moving “sooner and perhaps faster” than last time, but the pace of reduction, the balance sheet composition and how far it will be cut are still to be determined.

While the Fed will monitor “how Omicron impacts payrolls in January and February, but it sounds like they are confident it will not unduly weaken labor market conditions,” he added. “The statement on balance sheet reduction suggests the run-off is likely to start in the second half of the year.”

But the statement led Steven Oh, global head of credit and fixed income at PineBridge Investments, to expect balance sheet reduction this summer. “The indication of earlier quantitative tightening in conjunction with rate hikes tilts the meeting toward a more hawkish outcome, resulting in a spike up in Treasury yields.”

While the details were few, he noted, “Eventually they want to only hold Treasuries. For the mortgage market that matters.”

Runoff should follow the 2018 plan, Duncan said, where “they limited how much they would let mature each month. And if more than their limit would run off, they would buy back the difference.”

When asked how much in runoff would be equal to a quarter point rate hike, “Powell said there was not a rule of thumb,” he added.

The statement “continued the process of preparing the markets for interest rate liftoff in March,” said Northeast Investors Trust Chairman and Portfolio Manager Bruce Monrad. By noting “financial conditions ‘remain accommodative,’” he said, Fed officials will continue to use the phrase “to remind markets and critics that they believe interest rates still remain below the neutral level.”

From the Powell press conference, Monrad thought it interesting that the chair said, “interest rates could comfortably be raised without impairing the labor markets.” COVID risks appear to be accounted for, he said since “Powell made mostly perfunctory reference to downside risks facing the economy.”

“The Fed may feel forced to use its rhetoric to demonstrate that it means business with respect to inflation,” Monrad said. “Having said that, in response to a backhanded question about whether a 50 basis point rise was in the cards, Powell mostly quashed that thinking.”

While Powell said QT would “run in the background,” Monrad said, “the Fed may find that tightening financial conditions by reducing its balance sheet is a more opaque and useful complement to the difficult tradeoffs often surrounding raising interest rates.”