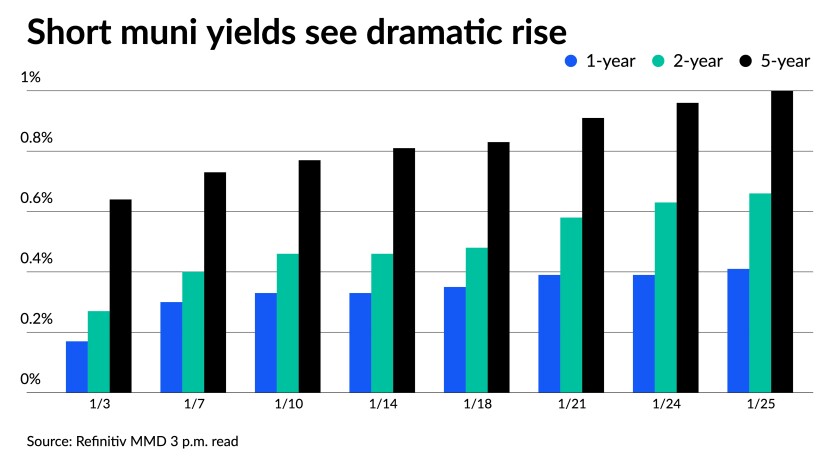 Municipals faced more cuts to triple-A benchmark yields with the five-year hitting 1%, a level not seen on Refinitiv MMD’s curve since May 2020 and the 10-year at 1.34%, a high not seen since April 2020 when the market was in recovery from the initial COVID-induced selloff.

U.S. Treasuries were slightly weaker while equities ended in the red after paring back much larger losses earlier in the day ahead of Wednesday’s much-anticipated FOMC meeting.

Triple-A benchmarks were cut two to six basis points across the curve with the largest moves concentrated again on bonds inside 10 years, underperforming Treasuries once again.

“This was our market catching up to prices set in taxables the week before and was regardless of stronger or more mixed conditions in U.S. Treasuries while the stock market fell sharply,” Fabian said.

Municipal to UST ratios were at or near the peaks of their recent ranges after rates climbed.

“Under more normal conditions, this might represent an entry point for tax-exempt investment, but the relative value ratios are increasingly an abstract pricing cue for most investors,” he said.

He said funds and exchange-traded funds, which both took a step back last week, with Refinitiv Lipper and the Investment Company Institute showings small outflows and Bloomberg showing a spike in net redemptions by MUB holders, provide a better indicator.

He said these have resulted in a negative NAV trend for the funds, down 1.5% to 2% year to date, which, “while better than the NASDAQ, is not exactly stellar.”

They are faring better than corporates, which are negative 2.81% month-to-date and corporate high-yield at negative 1.72%.

The February reinvestment period starts this week, and the total bid for the next month may be as high as $25 billion, a 33% rise over January and an 11% increase over February 2021, according to Fabian.

With net supply sitting at $7.35 billion, he said a positive framework appears to be in place, and real net selling pressure has been low, but a surge in price discovery highlights how the present market action is more volatile than usual.

J.P. Morgan Securities priced for the Connecticut Health and Education Facilities Authority (Aaa/AA//) $400 million of Yale University Issue revenue bonds. The first tranche, $125 million of Series U-1, saw bonds maturing in 7/2033 with a 1.10% coupon priced at par, a mandatory put date of 2/11/2025.

Treasuries saw small losses and equities were in the red.

And, inflation will be the biggest problem for the bond market this year, he said, adding that with inflation soaring across the globe, it “makes it much more likely to be sticky.”

Additionally, public opinion has shifted “in favor of labor over management, government regulation over free markets, on-shoring over off-shoring, and protectionism over free trade,” he said. “Every single one of those trends is inflationary.”

Wages appear poised to continue to rise, he noted, and supply chain issues will ease because of rising prices, not infrastructure developments, “which will feed inflation.”

If the government decides to spend big on climate change with inflation running hot, it will parallel the 1970s when the government increased spending on combating water and air pollution while inflation was also high, Ellenberger said. The belief back then was also inflation would be transitory and would ease after the OPEC oil embargo ended, but it didn’t, he said.

The concern is inflation expectations becoming “embedded in business and consumer psychology,” he said, leading to a “self-fulfilling prophecy” as consumers and businesses ramp up spending to avoid higher prices later. “The only real fix to that is a painful recession, typically brought on by rapid and large rate increases by the Fed.”

Padhraic Garvey, ING regional head of research, said the Fed “has in fact done nothing so far apart from talking, but has managed to get some decent verbal tightening in.” And, despite a decline in nominal rates, “the journey for real rates is still up.”

But 10-year inflation expectations “are likely to hit a roadblock between here and 2.25%, which should limit the pull lower coming from this,” Garvey said. “But there is no such roadblock for real rates, with the 10-year still 60 basis points away from zero. Ahead, if real rates continue on their journey toward a non-negative state, this should begin to dominate, ultimately pushing nominal rates back up.”

And the endgame for the Fed, according to the markets, is below a 2% fed funds rate target, “which suggests ample skepticism in markets that the Fed will be able to raise rates too far without slowing the economy and having to pause the hiking cycle,” said Scott Ruesterholz, a portfolio manager at Insight Investment. “As inflation moderates closer to target over 2022, financial market conditions could become a larger factor in Fed decision making and if volatility persists, lead to a slower pace of rate increases later this year or 2023.”

Meanwhile, consumer confidence fell, but not as much as expected, and regional surveys suggested an economic slowdown in January.

The consumer confidence index fell to 113.8 in January from115.2 in December. Economists polled by IFR Markets expected a 111.8 read.

“The first decrease in consumer confidence in four months was largely driven by the Omicron surge and stubbornly high inflation,” said Scott Anderson, chief economist at Bank of the West. The expectations index implies “somewhat less favorable consumer spending conditions ahead,” he added. “Nonetheless, consumers’ buying intentions actually improved across the board with the proportion of consumers planning to purchase a home, auto or major appliance over the next six months increasing in January. There was more good news buried in the report with the one-year ahead inflation expectations dropping for the second straight month after reaching a 13-year high of 7.3% in November of 2021.”

“Concerns about inflation declined for the second straight month, but remain elevated after hitting a 13-year high in November 2021,” said Lynn Franco, Senior Director of Economic Indicators at The Conference Board. “Concerns about the pandemic increased slightly, amid the ongoing Omicron surge. Looking ahead, both confidence and consumer spending may continue to be challenged by rising prices and the ongoing pandemic.”

The Federal Reserve Bank of Philadelphia’s nonmanufacturing survey saw the index for general business conditions in the region plunge to a contractionary negative 16.2 in January from positive 27.3 in December, while at the firm level the index dropped to 2.6 from 25.9. The price indexes both rose in the month, while the number of employees index fell.

The Federal Reserve Bank of Richmond’s service sector survey’s revenues index fell while demand rose and the local business conditions index slid into negative territory, the employment index dipped while wages ticked up, and the price indexes declined from the prior month’s numbers.