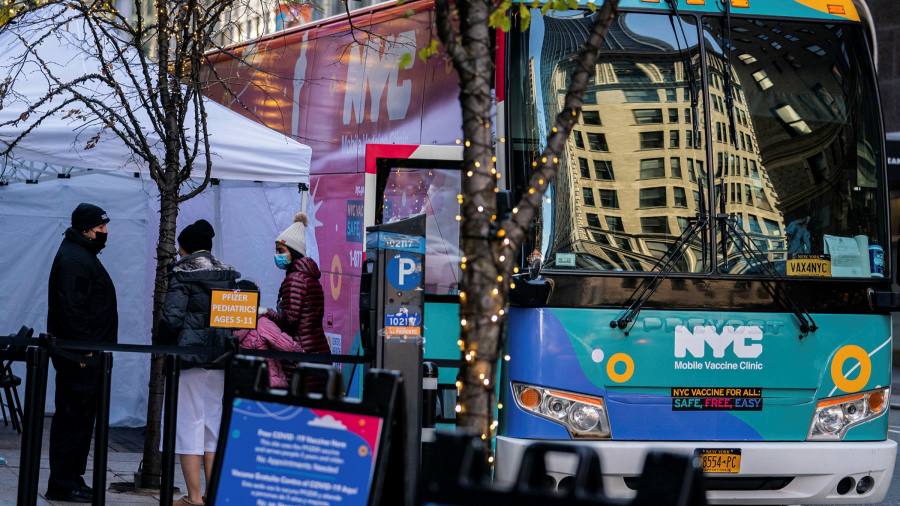 New York will require all private sector workers in the city to be vaccinated against Covid-19, in what would be the strictest vaccine mandate to be imposed anywhere in the US.

Mayor Bill de Blasio said on Monday the new rule would go into force on December 27 and would apply to all private companies regardless of size. His office will release a set of protocols applying to about 184,000 businesses on December 15 providing further details of the mandate, such as enforcement and penalties for non-compliance.

De Blasio said there “will not be a testing option as an alternative” to being vaccinated, as was being proposed by the Biden administration as part of a separate nationwide plan.

The mayor said the mandate was being imposed to slow the spread of the Omicron coronavirus variant that had threatened to exacerbate infection rates in the city, which had almost doubled in the past month.

He told the news channel MSNBC: “We in New York City have decided to use a pre-emptive strike to really do something bold to stop the further growth of Covid and the dangers it’s causing to all of us.”

De Blasio added: “Omicron is here, and it looks like it’s very transmissible. The timing is horrible with the winter months.”

Business groups could appeal against the New York ruling in the courts. De Blasio and Georgia Pestana, the city’s top lawyer, said the health commissioner had a legal obligation to protect the public health of New York City and they were confident the mandate would survive any challenges in court.

Devjani Mishra, an employment lawyer at Littler Mendelsohn, called it a “first of its kind requirement in terms of covering all private employers”.

She added: “The enforceability of this mandate rests on both the fact that the pandemic is a general public health emergency and the fact that the mandate will apply ‘across the board, not picking and choosing’ among industries.”

De Blasio said the mandate was “borrowing” from input he gleaned from “months and months” of conversations with the private sector, whose main concern was avoiding the “huge restrictions we had last year”.

The mayor said he heard from many business leaders that the best thing for them was for the government to set a single, universal standard.

The heavily mutated Omicron variant has been confirmed in at least 17 US states, and health officials expect it to spread rapidly. Scientists across the world are rushing to work out whether it is more transmissible, more deadly or better able to evade vaccine protection than previous strains.

President Joe Biden announced in September his administration would impose a mandate on all private companies with 100 employees or more to make sure staff are either vaccinated or test negative for the disease every week. The administration is imposing separate mandates on federal employees and contractors, as well as healthcare groups that perform work under the publicly run Medicare and Medicaid insurance schemes.

Those mandates were due to come into force on January 4, but judges have imposed temporary blocks on the rules applying to both private sector employers and healthcare providers.

While the federal government fights its case through the courts, states and cities are imposing their own rules instead. Many states have imposed vaccine mandates on healthcare workers and teachers, while Puerto Rico has said there will be a vaccine or test requirement for all private employers with 50 staff or more in the US territory.

De Blasio also announced anyone over 12 using indoor dining, entertainment or gyms in New York City would also have to be double vaccinated. Children aged five to 11 will be allowed to enter with only one vaccination.

“We are confident because it’s universal,” said De Blasio, who is due to leave office in a few weeks.

How to Create a 10 Delta Iron Condor for an 80% Probability of Success!
Stocks making the biggest moves in the premarket: 3M, Johnson & Johnson, General Electric and more
Municipal yields continue rising even before Fed statement
Wisconsin’s surplus projection grows by $2.9 billion
Options Trading: Why Sell a PUT When You Can BUY a Call