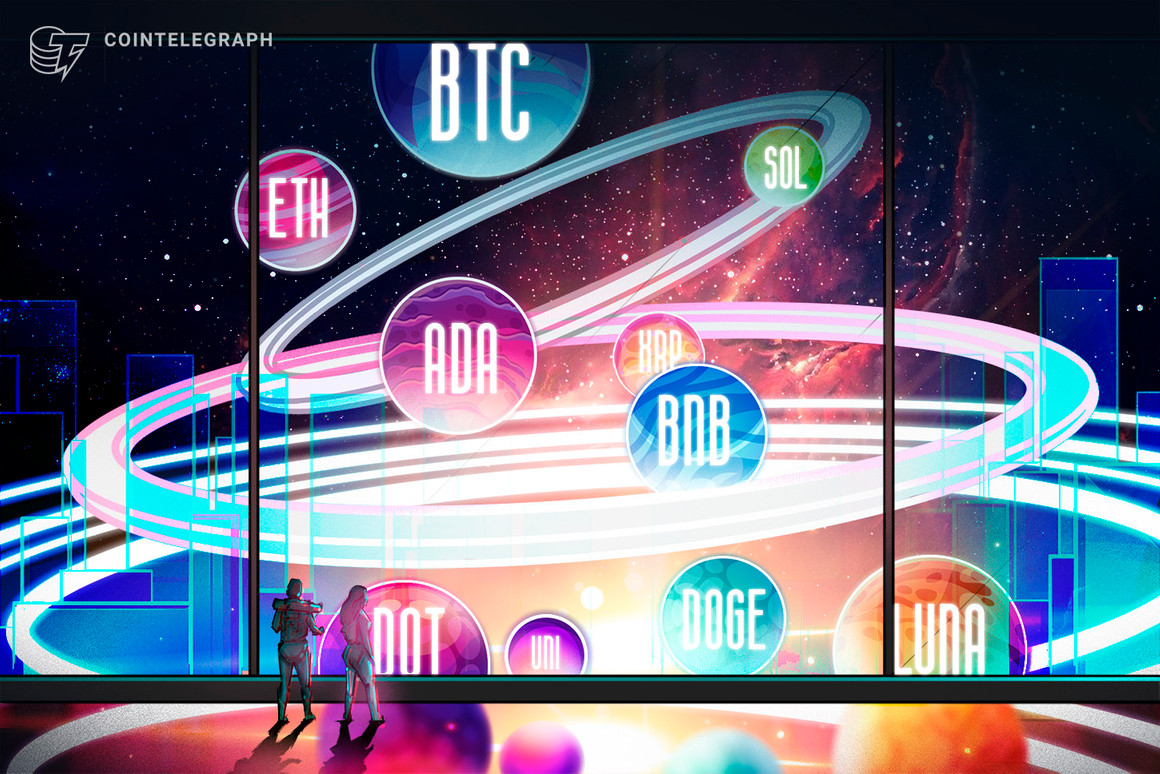 Bitcoin (BTC) is leading the recovery in the crypto sector and today the cryptocurrency briefly rallied to $48,429 before pulling back to test the underlying support levels.

While speaking during a live stream at the SALT conference, Ark Invest CEO Cathie Wood, said that Bitcoin is the default currency of the crypto space and could rise tenfold in the next five years.

Her projection is based on the presumption that Bitcoin will find a place in the balance sheets of many companies and institutional investors will increase their allocation to Bitcoin and other cryptocurrencies to about 5%.

Several legacy finance companies have realized the growing demand for digital assets and are increasing their crypto offerings to fulfill it. Morgan Stanley recently set up a new crypto-focused research division “in recognition of the growing significance of cryptocurrencies and other digital assets in global markets”.

Additional positive news came from Fidelity Investments executives who apparently met several United States Securities and Exchange Commission officials and stressed the importance of why a Bitcoin exchange-traded fund should be approved. The executives pointed to the increasing rate of Bitcoin adoption, approvals of similar funds in other countries and growing demand for digital assets.

Can Bitcoin and altcoins sustain the current rebound? Let’s analyze the charts of the top-10 cryptocurrencies to find out.

The long tail on the Sept. 13 candlestick shows that bulls were aggressively buying on dips close to the critical support at $42,451.67. Sustained buying by the bulls and possibly short-covering by short-term bears has propelled Bitcoin above the 20-day exponential moving average ($47,195) today.

The relative strength index (RSI) has jumped back into the positive territory and the 20-day EMA has flattened out, signaling a minor advantage to buyers. A breakout and close above the overhead zone will signal the resumption of the uptrend.

However, bears are unlikely to throw the towel easily. They will attempt to stall the up-move at the overhead zone. If the price turns down from the resistance, the pair could consolidate in a large range for a few more days.

The bears will have to sink and sustain the price below $42,451.67 to gain the upper hand.

If bulls overcome the overhead hurdle, the ETH/USDT pair could again attempt to rise to $4,000. Alternatively, if the price turns down from $3,567.06, the pair may drop to the 50-day SMA.

Such a move will suggest that the pair could remain range-bound for a few days. The flat 20-day EMA and the RSI just above the midpoint indicate a slight advantage to buyers.

The bears will have to sink and sustain the price below the critical support at $3,000 to signal the start of a possible down move.

Cardano (ADA) plunged below the breakout level at $2.47 on Sept. 13 but the bears could not pull the price down to the 50-day SMA ($2.21). This suggests that selling dries up at lower levels.

The ADA/USDT pair formed a Doji candlestick pattern on Sept. 14, indicating indecision among the bulls and the bears. This uncertainty has resolved to the upside today and buyers are attempting to clear the hurdle at the 20-day EMA ($2.55).

On the contrary, if the price turns down from the 20-day EMA, the bears will again try to sink the pair to the 50-day SMA. A break and close below this support will suggest a possible trend change.

The bears could not capitalize on the break and close below the 50-day SMA ($414) on Sept. 13, which suggests buying at lower levels. The bulls are currently attempting to push Binance Coin (BNB) above the 20-day EMA ($436).

If bulls succeed in sustaining the price above the 20-day EMA, it will suggest that the correction might be over. The BNB/USDT pair could then move up to the overhead resistance at $518.90. A break and close above this level will signal the resumption of the uptrend.

On the contrary, if the price turns down from the 20-day EMA, it will indicate that bears are selling on relief rallies. The bears will then make one more attempt to sink the pair to the next support at $340.

XRP bounced off the 50-day SMA ($1.05) on Sept. 13 suggesting that bulls are defending this level. The altcoin could now rise to the 20-day EMA ($1.13) where the bears are likely to pose a stiff challenge.

The 20-day EMA is sloping down gradually and the RSI is just below the midpoint, suggesting a minor advantage to the bears. A break and close below the 50-day SMA will suggest that bears have overpowered the bulls. The selling could intensify if bears sink the price below the Sept. 7 intraday low at $0.95.

Contrary to this, if bulls drive and sustain the price above the 20-day EMA, it will indicate that the correction could be over. The XRP/USDT pair could then rise to the overhead resistance zone at $1.35 to $1.41.

The long tail on Solana’s (SOL) Sept. 13 and 14 candlestick shows that bulls are attempting to defend the 20-day EMA ($145) but the negative sign is that bears are not allowing the rebound to sustain.

The inside-day candlestick pattern today indicates indecision among the bulls and the bears. If the uncertainty resolves to the downside and the SOL/USDT pair plummets below the 20-day EMA, the correction could extend to the 61.8% Fibonacci retracement level at $123.42.

The deeper the correction, the longer it may take for the next leg of the uptrend to begin. On the other hand, if the price turns up and rises above $171.83, the pair could rally to $197.41 and then retest the all-time high at $216.

Polkadot (DOT) has continued its northward journey but the bulls have not been able to clear the hurdle at the resistance line. The RSI has turned down from the downtrend line and the negative divergence is intact.

If buyers thrust and close the price above the resistance line, the DOT/USDT pair could pick up momentum. The pair could then rally to $41.40 and if this level is crossed, the next stop could be the all-time high at $49.78.

Alternatively, if the price turns down from the current level, the pair could drop to the 20-day EMA ($31.45). A strong bounce off this support will suggest that bulls are aggressively buying on dips. That will increase the possibility of a break above the resistance line.

A break and close below the 20-day EMA will be the first sign that bears have made a strong comeback.

Dogecoin (DOGE) is stuck between the moving averages and the support level at $0.21. Although bulls are attempting to defend the $0.21 support, the bounce lacks strength. This suggests weak demand at current levels.

The moving averages are on the verge of completing a bearish crossover and the RSI continues to trade in the negative territory, suggesting that the path of least resistance is to the downside.

If bears sink the price below $0.21, the DOGE/USDT pair could plummet to the next major support at $0.15.

On the contrary, a break and close above the moving averages will be the first sign that bulls are back in the game. The pair could pick up momentum above the downtrend line.

The bears repeatedly failed to pull Uniswap (UNI) below the Sept. 7 intraday low at $21 in the past few days. This shows buying at lower levels. The bulls pushed the price above $25 on Sept. 14 but are facing stiff resistance at the moving averages.

If the price turns down and breaks below $25, the UNI/USDT pair could again drop toward $23.45 and then $21. This is an important level to watch out for because a break below it could signal a deeper correction.

On the contrary, if the price rebounds off $25 or from $23.45, it will suggest that bulls are attempting a comeback. A break and close above the moving averages could open the doors for a possible rise to $31.41.

Terra protocol’s LUNA token bounced off the 20-day EMA ($33.50) on Sept. 13 as seen from the long tail on the day’s candlestick. This suggests that sentiment remains positive and traders are buying on dips.

The LUNA/USDT pair formed an inside candlestick pattern on Sept. 14, indicating indecision among bulls and bears. A break and close below the 20-day EMA will signal advantage to the bears. The pair could then correct to the 50-day SMA ($25.25).

Conversely, if bulls drive the price above $38, the pair could again resume its up-move toward the all-time high at $45.01. A break and close above this resistance could propel the pair to the psychological level at $50.

The views and opinions expressed here are solely those of the author and do not necessarily reflect the views of Cointelegraph. Every investment and trading move involves risk. You should conduct your own research when making a decision.

In The Famous Bird Streets Of Los Angeles, An Architectural Gem Hits The Market For $13.7 Million
Stocks making the biggest moves after hours: Netflix, Nordstrom and more
Blockstream raises $125M to finance expanded Bitcoin mining operations
These common misconceptions can prevent you from achieving that perfect credit score
US economic growth slowed in fourth quarter of 2022