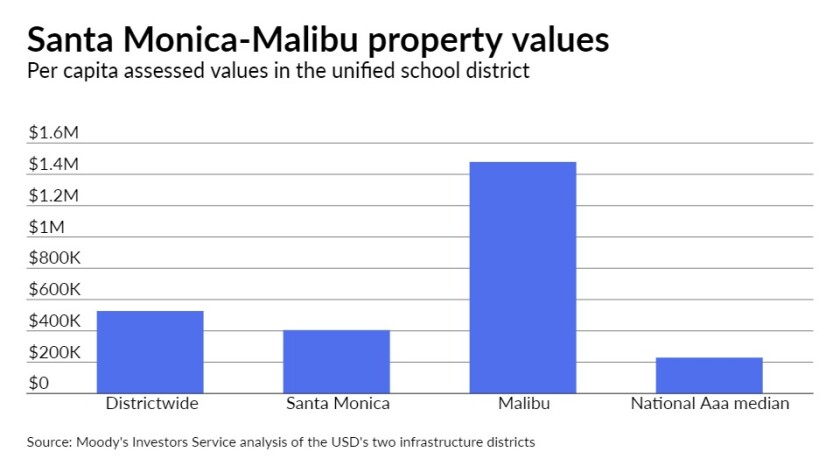 A battle between the haves and the have-mores may split up a well-off California school district.

The 70-year-old district that serves Santa Monica and Malibu is contemplating breaking up along city borders. Or more precisely, the even-richer city of Malibu wants to split its schools from those in its more urban neighbor.

If they continue down the path to actual divorce proceedings for the Santa Monica Unified School District, how the custody of the district’s sizable debt load will be split is not clear.

Even if the division occurs there will remain more than enough wealth and revenue to service that debt.

As of Aug. 1, the district had $927.9 million of debt outstanding, according to its most recent official statement, for an August refunding deal.

Of that, $543.8 million is the general obligation of the entire district, with the balance split into two school facilities infrastructure districts, one for Malibu and one for Santa Monica.

The two infrastructure districts paint a picture of the disparities on either side of the dispute.

Both have a pretty hefty assessed property valuations, according to a Moody’s Investors Service credit report, but the per capita AV in Malibu is triple that of Santa Monica, which remains well ahead of national medians for Aaa-rated districts.

“We maintain ratings on the school district, which includes the school improvement districts,” said Joe Manoleas, a Moody’s analyst. “They are both rated Aa1 on the general obligation limited tax bonds. Our analysis combined the entity’s financial positions. It also looks at the school district’s infrastructure taxing district.

“Though there are differences between the two, we view both sub areas as having very high credit quality,” Manoleas said.

The Los Angeles County Office of Education is holding a hearing Saturday to decide if it will move forward on more extensive research into what breaking up the 10,000-student district would mean financially and how it might affect student outcomes.

The drive to split is propelled by the Malibu City Council, which believes its children are not well-served by the larger unified school district.

If the plan comes to fruition, Malibu would use its own property taxes to pay for its schools, but would share some of the money with Santa Monica for a decade.

Malibu wants control over how money is spent on education programs and teachers and over what courses Malibu high school students are offered, according to its separation offer. And it wants the ability to create a safety plan to take into account dangers that wildfires, mudslides and flooding pose to the beachside community.

Officials with the unified school district warn that the Malibu proposal would leave a standalone Santa Monica district in the financial lurch and prompt deep cutbacks to programs for its diverse student body.

“The SMMUSD Board of Education has openly acknowledged its support for separating SMMUSD into two school districts as long as the financial terms are fair and equitable and students are not harmed, regardless of which part of the district they attend school,” Superintendent Ben Drati wrote in a Sept. 10 open letter to parents, staff, students and community letters.

The County Office of Education report reflects a “dire” financial future for students of Santa Monica if City of Malibu’s proposal to split the district is approved, according to the letter.

Malibu’s plans fails to meet eight of the nine criteria set forth by state law, including the question as to whether it could enroll enough students, according to the County Office of Education report prepared in advance of Saturday’s hearing.

The report also highlighted concerns about whether Malibu, on its own, could enroll the 1,500 students necessary for a unified school district.

It also raised diversity concerns. “It is clear that, even on the highest-level analysis, the Malibu USD, if created, will be an entity that is vastly more White than the resulting Santa Monica USD or the current Santa Monica-Malibu USD,” the report said.

Drati’s letter also said the county’s report says a split would result in a 21.52% drop in revenue, which would be harmful for Santa Monica students.

The current district is so property-rich that it is considered a “basic aid” district in California law, which means the revenue it gets from property taxes exceeds what it would receive in the state aid most districts receive.

“It is not clear if both resulting districts could maintain basic aid status or if a resulting Santa Monica USD would need additional support from the state,” the County Office of Education said in its report.

Though Santa Monica and Malibu are both affluent, the mountainous beach city does have higher property values. Even in the aftermath of the Woosley fire that completely destroyed some Malibu houses, the city’s assessed value grew by 4.5% in 2019, according to Moody’s report.

“This is highly desirable real estate and there is a strong momentum to rebuild,” Manoleas said.

A lot of the assessed value is in the dirt, not the structure, Hoffmann said.

“The properties, where those homes were will retain their value,” Hoffmann said. “That is valuable real estate, being in Malibu, in the hills, with a view of the ocean. It may not be rebuilt immediately, and there may be new ground rules around rebuilding, but it will likely be rebuilt in the future.”

The school district’s high bond ratings were unaffected by the fire.

Their assessed valuations, combined with FEMA reimbursements and the presence of private insurance protects bondholders from wildfire risk, he said.

Malibu council members also contend the school district is really run as two separate entities — except Malibu doesn’t have representation on the board, because all of the board positions are elected at-large.

The two parts of the district are not even physically connected; a chunk of the Los Angeles Unified School District reaches the Pacific, separating the Malibu and Santa Monica sides.

Neither Manoleas nor Eric Hoffmann, a Moody’s senior vice president, could think of a single example where a school district this size has split.

“Most instances I can think of went in the other direction — with two smaller school districts unifying,” Hoffman said.

The district holds Aa1 general obligation bond ratings and an Aa2 issuer rating from Moody’s Investors Service with a stable outlook. S&P Global Ratings assigned its AA-plus long-term rating to the school district and gave it a stable outlook ahead of its $121.9 million refunding of taxable GOs this summer.

“The rating reflects our view of the school district’s high-income levels and extremely strong tax base, in addition to its ‘basic aid’ status, which makes it less reliant on potentially volatile state revenue,” S&P analysts wrote.

“Basic aid or locally funded districts keep all local property tax revenue and receive little to no general funding from the state, resulting in state budget cuts or average daily attendance decreases having less of an effect on revenue.”

Of what S&P called the school district’s “long-standing discussions regarding institutional separation,” analysts said, while they understand that division is a possibility they “don’t expect a formal division to occur within the next few years.”

The OS for the deal disclosed the possible reorganization of the district.

“There is still considerable runway before anything gets actualized,” Manoleas said.

There is a lot more to come on the potential reorganization of the debt and finances, he said, beyond the initial analysis produced by the Los Angeles County Office of Education.

“We want to see more concrete information on that, before we determine what impact it will have,” he said.

The LACOE public hearing scheduled for Saturday would determine if the proposal moves forward from preliminary consideration to a full review that would consider financial ramifications, including for the bonds.

In his letter, Drati said he thinks LACOE should deny Malibu’s petition, so the school district could focus on the challenges of educating students during a pandemic.