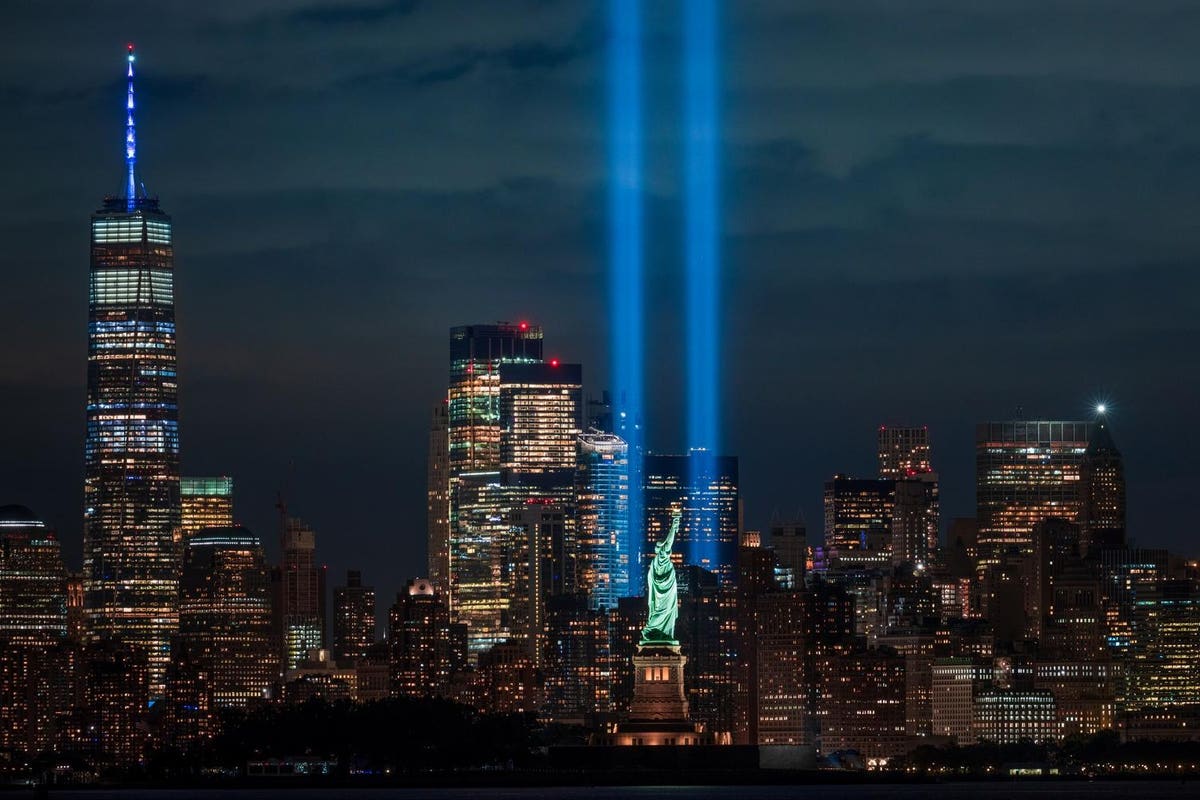 Our city has many lives.

September 11, 2001, started like any other Tuesday. We had office meetings planned; they were to begin at 9:30 AM. But by 9:15, the day had switched from normal to surreal. As we watched, the endless loop of the planes crashing into the towers, and then the towers falling, began to cycle on our conference room screen.

My daughter had arrived home the night before, after a year working and traveling through Asia and  Europe. She called me around 10 AM, saying simply, “You need to come home.” I did.

As I left the building, I will never forget the vista down Madison Avenue from the corner of 76th Street: No cars, few pedestrians, and in the distance, utterly vivid, a tower of black smoke ascending inexorably into the sky. Like everyone in New York that day, I walked – in my case, through the Park to Central Park West, home, and my disoriented and terrified daughter.

Three thousand miles away, in California, my wife arose at my brother’s home in Berkeley and checked her room for anything forgotten as she closed her suitcase for her trip to the airport and home to New York. My brother rushed in to tell her what he had seen on TV, and to tell her she wasn’t going anywhere. It was over a week before she was able to get home, a week during which cell phone calls were impossible to make or receive, and landlines were jammed. We barely spoke that whole week.

Meanwhile, my daughter’s boyfriend and his four roommates (her friends as well) had fled their apartment a block from the World Trade Center, and begun the long trek uptown to our apartment, where they arrived, covered in ash, five hours later. They would all live in our apartment for the next week and a half, sleeping in beds, on floors, on sofas. We all shared a single, tiny bathroom off of the kitchen as the other two were under renovation. I became the cook and, to the best of my ability, a counselor.

Our real estate deals began to fall apart immediately. Buyers fled their deals; many fled the city. Millions of dollars in broken contract deposits were left on the table. Tribeca, where toxic smoke lingered for weeks, remained shut to traffic and gawkers alike; it was as if the bottom 10% of Manhattan had been severed, except for the smoke which continued to pour into the sky.

During those weeks after 9/11, the conventional wisdom had it that the city was dead. Who would want to live in such a vulnerable, obvious target in a world in which things like this could happen? And indeed, for a while, it seemed as if no one would. Real estate agents all over the city were engaged primarily in unwinding deals, not setting them up. Perhaps the most relieved individual in our business was Barbara Corcoran, who had closed on the sale of her eponymously named firm to Cendant for a rumored $70 million on September 10th!

Throughout that long fall and early winter, people continued to leave New York. Residential sales simply stopped — no one wanted a piece of the sudden and seemingly rotten Big Apple. At meeting after meeting, I spoke to our agents about the need to be an unofficial Chamber of Commerce for our city, to remember and remind others of the city’s resilience, its ability to rebuild and be reborn. Those who remained loved our city like never before.

And, for a few brief months, politics were put aside. Every American was a New Yorker.

Then, in January of 2002, the market woke up. Hope was in the air. As the toxic damage became less apparent in our air and on our streets, buyers began returning in a trickle, then a stream, a river, a finally, a cascade. Everyone wanted a piece of the city that could bounce back from catastrophe. Real agents struggled back onto their feet after the market’s hibernation, and emerged excited and ready to meet the onslaught. The city was back.

The real estate parallels between 9/11 and the pandemic are striking. Both saw residents fleeing town. Both saw markets grind to a halt (although the post-9/11 halt was worse!) And both have proven to be examples of New York’s resilience. Buyers return, both full-timers, and those who want a pied-a-terre in the country’s most glamorous town. Blows delivered to the city just reaffirm these buyers’ commitment to its charms and offerings.

There will always be naysayers, and in the end, they always turn out to be wrong. Neither terrorists nor diseases can keep New York down for long.