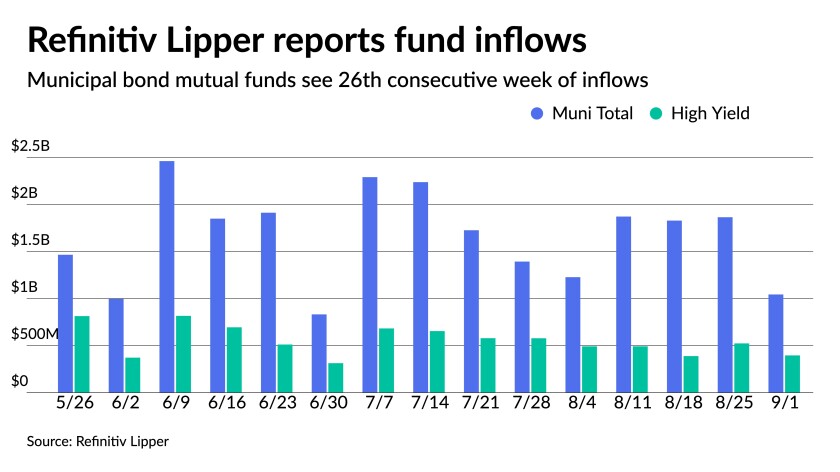 The municipal market traded sideways and activity was muted on Thursday as U.S. Treasuries were steady and equities in the black ahead of the much-anticipated employment report to be released Friday.

All eyes are on Friday’s unemployment number ahead of the long Labor Day weekend while the effects of Hurricane Ida on the New York region also made for lighter trading desks.

“We’re feeling the storm effects in the market today,” after Ida swept through the region on Wednesday evening into Thursday morning, according to John Farawell, manager of municipal bonds at Roosevelt & Cross.

“There are some empty desks and people not working,” he noted. The storm impacted transit in New York City, with some roads flooded and many trains in New York and New Jersey not in service.

He said many investors were in a “wait and see” pattern all week, anticipating Friday’s monthly report from the Labor Department.

“We go from the Fed talk to the unemployment number on Friday,” he said. “There are some supply constraints and we have a flat Treasury market that is not moving much.”

The smaller primary market this week and much lighter inventory in the secondary market kept rates steady.

“We have a scenario with rates so low retail is a struggle in spots,” he said. “You have that person that likes the short end of the market, but the rates are just not attractive.”

Investors are loaded with cash and are forced to buy, so a lot of New York deals, like the Transitional Finance Authority, are doing well, Farewell added.

“You have a big employment number Friday, and the Labor Day holiday weekend, so that magnifies and increases the sideways trading,” he said.

The four-week moving average remained positive at $1.653 billion, after being in the green at $1.698 billion in the previous week.

Powell renomination?
If the question of when the Federal Reserve will begin tapering asset purchases is the primary question for the market, the second Fed-related question is will President Biden renominate Chair Jerome Powell for a second term.

The decision is generally made around this time, since Powell’s term ends in February, and if a change were to be made, some transition time would be needed. Treasury Secretary Janet Yellen reportedly has endorsed Powell for a second term. And even those senators that don’t like Powell’s regulatory approach have not said they wouldn’t back him if Biden were to offer a second term.

Powell will get the nod, and “should face little resistance in D.C. to a reappointment,” said Jake Remley, senior portfolio manager at Income Research + Management. “Long-term inflation remains low and stable despite the Fed’s balance sheet growing to nearly $8 trillion.”

And while Powell’s Fed added $4 trillion in pandemic stimulus, he said, “it’s too soon for his detractors to convincingly argue that he has led the Fed down the path of runaway inflation.”

The markets want Powell to stay because he provides “clarity,” Remley said. “Anyone nominated not named Jerome Powell, will introduce gross uncertainty for a period of time.”

The vice chairs, however, are not secure, with Randal Quarles and Richard Clarida also close to the end of their terms. Fed Gov. Lael Brainard, who seems to be the only possible challenger to Powell, likely to be bumped up.

“If that comes to pass,” he said, “the markets may anticipate tighter oversight and regulation of the banking industry. This could impact liquidity and spreads into year end.”

Kevin Flanagan, head of fixed income strategy at WisdomTree, agreed that preventing uncertainty plays in Powell’s favor. “At this point, it would appear as if Powell has the inside track to be renominated,” he said.

With Yellen’s seeming endorsement, “one would think that carries a lot of weight within the Biden administration,” Flanagan said.

But with tapering close, it would make sense to keep Powell, he said, as “a ‘continuous’ Fed leader would be a strong one.”

Powell is well regarded by Congress and the president’s economists, noted said Steve Skancke, Keel Point chief economic advisor. “Powell has been an effective leader, especially during the COVID pandemic financial and economic crises, in pursuing the Fed’s mandates,” Skancke said. “His delicate balancing of employment growth goals and restraining inflation in what has been a low-inflation, full-employment environment for the past decade — pre-COVID — is broadly viewed as successful.”

Presidents usually renominate Fed chairs, although President Trump didn’t when he replaced Yellen with Powell in 2018. But, progressive members of the House are pushing for a new chair, although they didn’t suggest anyone, who will promote their agenda of stopping climate change and encouraging racial and economic equality.

“The Fed can therefore legally pursue other objectives only in so far as doing so contributes to these primary aims, and not as primary aims in themselves,” Selgin said. “Changing the Fed’s chair will not change its mandate.”

In addition, “the Fed’s regulatory powers and monetary policy instruments severely limit its capacity to pursue other goals, including combating climate change or advancing racial and economic justice,” he said. “For example, the Fed is not allowed to engage in outright purchases of ‘green’ securities that are neither U.S. government or agency securities.”

For the Fed to pursue the far left’s goals, the Federal Reserve Act would have to be amended. “Assuming that such alterations were not themselves fraught with dangers — there is considerable risk that the greater powers they would grant the Fed would be used for purposes other than those intended,” Selgin said. But even so, it wouldn’t be wise to change leaders “as the Fed struggles to manage a difficult post-crisis recovery.”

Should a change be made, Keel Point’s Skancke said, “it will signal that the progressive agenda is dominating White House policy and personnel decisions.” That, in turn, would “spark a loss of confidence in the independence of the Federal Reserve System,” he said.

“The progressive agenda is struggling in Congress and is not likely to achieve their stated goals, leaving it to Executive Branch action and presidential appointees in the Federal agencies,” Skancke said.

And changing chairs won’t expand “the Fed’s mandate to include other progressive priorities,” since while the chair is important, “decisions are largely made by vote of the full Board of Governors and its committees,” he said. “Replacing Chair Powell would also be disruptive to financial market confidence in the Fed at a time when it is most critical.

Expanding the Fed’s goals to include climate change and racial equity “would be a mistake,” said Peter Ireland, an economics professor at Boston College and member of the Shadow Open Market Committee. “Monetary policy is not well-suited to address these problems.”

Monetary policy, he said, has no impact on “pollution levels, global temperatures, or the severity of storms.” And while policy “has important effects on total GDP and employment,” Ireland added, “its effects on the distribution of income and wealth are far less certain.”

And since monetary policy won’t help with climate change or racial equality, “it must be that proponents of these objectives want the Fed instead to use its credit-granting powers to favor, say, green industries and to favor lower-income families,” he said. “If this is what they have in mind, what they’re asking the Fed to do is to step into the business of fiscal policy. But that’s Congress’ job.”

Those mandates should come from “elected members of Congress,” Ireland said. “It shouldn’t be left to the discretion of unelected officials at the Fed.”

These members of Congress should “stop playing divisive political games and go back to designing programs that help ordinary Americans.”

As for data released Thursday, initial jobless claims fell to a pandemic low of 340,000 on a seasonally adjusted basis in the week ended Aug. 28 from an upwardly revised 354,000 a week earlier, first reported as 353,000.

Continued claims also fell to a pandemic low at 2.748 million in the week ended Aug. 21 from 2.908 million a week prior.

“There’s still a way to go to get back into the low-to-mid 200,000 range where new claims stood before the pandemic exploded and took a massive toll on the U.S. economy,” said Mark Hamrick, senior economic analyst at Bankrate.

The impending end of the extended pandemic unemployment benefits may not provide the bounce expected, he said. “High frequency economic data has suggested states which opted to exit these programs early did not see a hoped-for increase in employment amid a record number of reported job openings. How this plays out from here remains to be seen.”

Also released, second quarter non-farm productivity was revised down to a 2.1% rise from the initial 2.3% gain reported, and from the 4.3% pace in the first quarter. Unit labor costs were revised up to a 1.3% increase, first reported as a 1.0% climb, after a 2.8% drop in the first quarter.

Economists expected a 2.4% rise in productivity and a 1.0% jump in unit labor costs.

The international trade deficit narrowed to $70.1 billion in July from $73.2 billion in June. Economists were looking for a $70.9 billion shortage.

“The July trade report showed the ripple effects of pandemic-era disruption as the United States and the rest of the world attempt to return to some semblance of normal,” said Wells Fargo Securities Senior Economist Tim Quinlan and Economist Shannon Seery. This narrowing, “if sustained, would boost third quarter GDP growth. That said, the factors driving the narrowing have to do with long wait times at U.S. ports and the re-emergence of foreign travel in July, which may prove fleeting.”

Christine Albano contributed to this report.