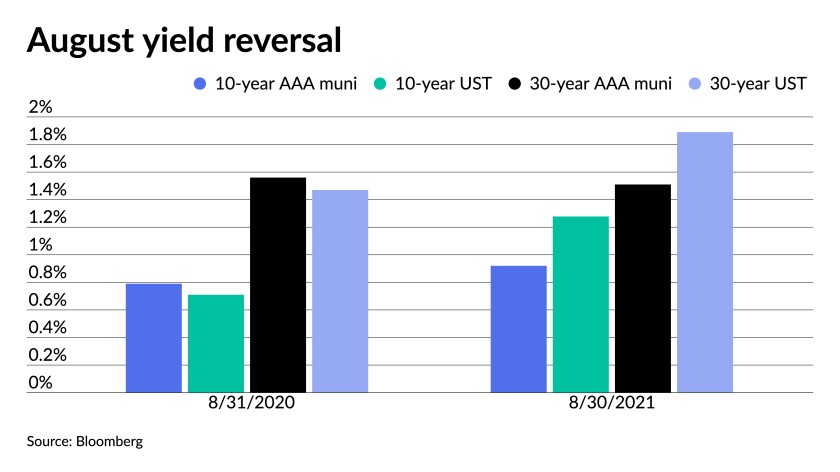 Municipals were little changed to a touch weaker on Monday, underperforming a slightly better U.S. Treasury market while the S&P 500 and Nasdaq rallied. The New York City Transitional Finance Authority priced $950 million of future tax-secured bonds for day one of a two-day retail order period.

Nearly all categories of municipals appear poised to end August with returns in the red. August returns of negative 0.40% would be the third-worst August performance of the past 10 years, according to Bloomberg Intelligence. The 1.49% year-to-date return for the Bloomberg U.S. Municipal Index ranks as the fourth lowest through eight months over the past 10 years.

High-yield saw two weeks of lower inflows into municipal bond mutual funds in August, contributing to the weaker performance, after a months-long series of large and record-breaking inflows throughout 2021.

“Municipal yields are low on an absolute level, so it would be hard for prices to rally dramatically,” according to a weekly report from Nuveen. “However, demand remains strong for tax-exempt bonds. We expect municipal rates to remain range-bound, and we would see any potential sell off as a buying opportunity.”

The municipal market is gearing up for continued supply-demand imbalances this fall, though not as dramatic as the summer months. Thirty-day visible supply is at $9.26 billion, per Bond Buyer data while net negative supply sits at $9.044 billion, per Bloomberg.

“The municipal market is typically conditioned to expect volatility and weaker technicals almost immediately after the last of summer redemptions are addressed,” Jonathan Law, portfolio manager at Advisors Asset Management said on Monday.

“Despite the record weekly inflows continuing to overwhelm new issuance, we are seeing the market take a breather this month with yields a few basis points higher than their 60-day averages, which seems very similar to how August 2020 played out, when yields eased off their historic lows,” he said.

With a little less than $4 billion set to price in the primary market this week, it means September reinvestment demand could easily outpace supply at least until after the Labor Day holiday, Law noted.

“Demand should remain relatively robust through year end,” he said. “It’s hard to see the billions of inflows into tax-exempt paper simply drop off in an instant. That said, given growing inflationary pressures and Federal Reserve tapering around the corner, it would not be a surprise to see muni investors hold back a bit and embrace more of a defensive approach, like we’ve seen in stretches throughout August.”

With year-end positioning already in play, now might be the time to upgrade credit quality, according to Richard Ciccarone, president of Merritt Research Services.

“Credit quality has been faring better than originally anticipated due, in no small part, to the billions of federal dollars that have stimulated the economy and indirectly or directly boosted revenues for most municipal bond obligors,” he said on Friday.

“Investors holding intermediate- to long-maturity bonds might be wise to exit credits that lack long-term credit durability and replace them with better quality new issue or secondary market bonds that currently have similar yields,” he added.

In late trading, Treasuries were better as equities were mixed.

Taper still debated
Following Federal Reserve Board Chair Jerome Powell’s speech to the Jackson Hole symposium on Friday, there is still no consensus among analysts on when a tapering announcement will come.

The announcement is expected at the December meeting, according to Morgan Stanley Chief U.S. Economist Ellen Zentner. “While Powell indicated that the taper decision may well come this year, he did layer in enough dovish discussion about the transitory nature of inflation, and the higher bar for maximum employment in the liftoff guidance, to draw a distinction between the taper decision and the implications for rate hikes,” she said in a note.

Based on his words, Zentner said, “a lot needs to change for him to become significantly less comfortable with the state of inflation.” Further, the chair “emphasized that tightening policy in response to transitory inflation could ‘do more harm than good.’”

And while Powell seems dovish about tapering, “a handful of hawks on the Fed have been pushing hard for an earlier start to tapering, and we think it is relevant that so many of them are going on the record,” Zentner said. “While the timing is far from settled, this may represent an effort to position themselves slightly to one side of where the Committee is likely to go to make sure the timing does not slip.”

Of course, the September Federal Open Market Committee post-meeting statement could offer hints. “If the language on the taper suggests it may be appropriate ‘in coming meetings,’ I will remain confident in the December call,” she said. “If the statement points to tapering ‘in coming months,’ then November comes into play. And if the statement provides that tapering ‘could soon be appropriate’ then November becomes all but certain.”

But, Scott Ruesterholz, a portfolio manager at Insight Investment, believes tapering could start “in November or December, though the Fed retains the option to delay it further if economic data were to soften.”

The speech, he said, “reaffirmed that Powell is clearly in the dovish camp, and that the Fed will be very deliberate in extricating itself from extraordinary policy.”

“Simply put, the Fed does not want to overreact to inflation and in the process slow the healing of the labor market,” Ruesterholz said. “That is why even when the Fed does begin tapering, there is no rush to begin raising rates with there being a higher hurdle on jobs and inflation before acting on rates.”

November may be the time for the announcement, said David Kelly, chief global strategist at JPMorgan, since the chair has promised to give notice in advance of tapering. “If the Fed begins to taper in December, it will likely announce that plan at either its September 21st/22nd meeting or at its November 2nd/3rd meeting.”

This will allow the panel time to watch the impact of the Delta variant and how the labor market recovers “after federal enhanced unemployment benefits come to an end next week.”

The pace is likely to be “$10 billion from Treasuries and $5 billion from mortgage-backed securities, bringing the reducing the total monthly pace of accumulation from $120 billion in November 2021 to zero by July 2022,” Kelly said. That end date, will give the Fed some leeway before liftoff, “which they may want to do by the end of 2022.”

But, he added, “there is also an unacknowledged reason the Fed would like a little more time – they need to know what will happen with fiscal policy,” specifically the $3.5 trillion budget package, “which contains many priorities of the Democrats, can only be passed through the reconciliation process and will need every one of the 50 Democratic and Independent senators to pass it.”

A blip, “which is quite possible,” Kelly said, could cause “complete confusion on actual fiscal policy for 2022, … a federal government shutdown and yet another episode where the U.S. comes close to defaulting on its debt due to its debt-ceiling rules.”

So it makes sense for the Fed to wait out the voting on the budget bill, he said.

Inflation, however, may become a big issue, said Jay Hatfield, founder, portfolio manager and chief investment officer of Infrastructure Capital Advisors. “We believe that Powell continues to ignore signs that inflation is accelerating in sectors that Fed policy directly impacts, which are housing and consumer durables.” He believes the announcement will come in November.

He points to “rents, which are increasing over 10% per year and steel prices which are in a hyperinflation increasing 200% over the last year. Consequently, we expect the Fed will have to raise rates at least twice in 2022.”

In data released Monday, pending home sales unexpectedly fell 1.8% in July after a 2.0% drop in June.

Economists polled by IFR Markets expected sales to grow 0.4% in the month.

“The market may be starting to cool slightly, but at the moment there is not enough supply to match the demand from would-be buyers,” said National Association of Realtors Chief Economist Lawrence Yun. “That said, inventory is slowly increasing and home shoppers should begin to see more options in the coming months.”

Separately, The Texas-area manufacturing sector expanded at a slower pace in August, according to the Dallas Fed’s Texas Manufacturing Outlook Survey.

The TFA is also set to sell $250 million of taxable future tax-secured bonds at 10:45 a.m. Eastern on Wednesday.

The South Carolina Association of Governments is set to sell $147.202 million of certificates of participation (MIG-1) at 11 a.m.

ESG: what issuers and market participants should strive for in 2023
Robots could surpass workers at Amazon by 2030, Cathie Wood says
Stocks making the biggest moves midday: Amazon, Alphabet, Apple, Nordstrom, Ford and more
Munis firmer across the curve, outflows return
Bank of England raises interest rates by 0.5 percentage points to 4%