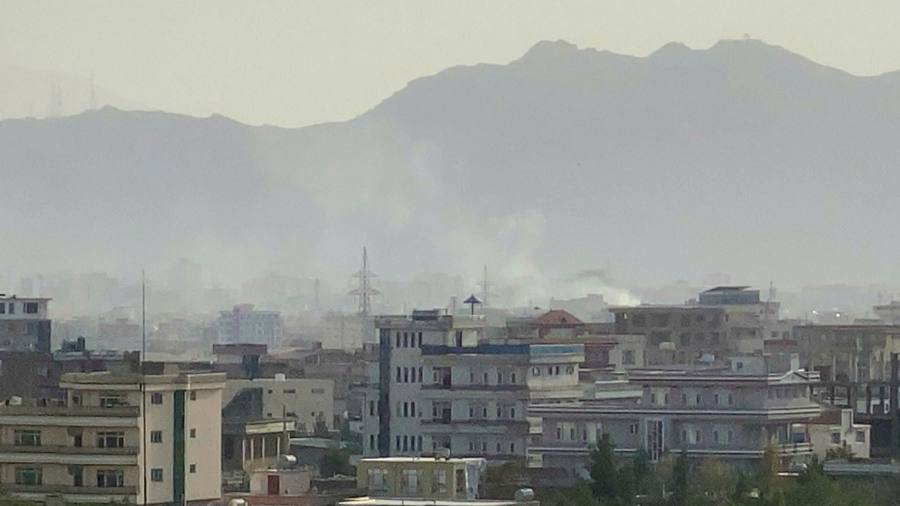 The US launched a drone strike to protect the Kabul evacuation effort on Sunday, as the Biden administration and its European allies promised to help people leave Afghanistan after Tuesday’s deadline for withdrawal.

The US military said it had carried out a “self-defence” air strike on a vehicle in the Afghan capital, which posed an “imminent Isis-K threat” to the international airport. Isis-K, the local branch of the Islamist terror group, claimed responsibility for a suicide bombing on Thursday that killed more than 100 Afghans and 13 US troops.

“We are confident we successfully hit the target. Significant secondary explosions from the vehicle indicated the presence of a substantial amount of explosive material,” said Captain Bill Urban, a US Central Command spokesman.

Footage from the city showed a cloud of smoke above a neighbourhood in north-west Kabul, though it was not immediately clear if this was from the same attack. The US said there were no indications of civilian casualties.

The drone strike came hours after President Joe Biden warned that another terror attack in the area was “highly likely in the next 24-36 hours”. It also highlighted the risks to those involved in the final days of the western evacuation from the Afghan capital, with US officials continuing to warn of another imminent attack.

Jake Sullivan, the president’s National Security Adviser, told CNN on Sunday: “We are doing everything in our power to prevent and disrupt the threat streams that we are seeing and stopping any kind of attack that would endanger the lives of American service members or civilians trying to get into the airport.

“But all we can do is mitigate risk, we cannot eliminate it and we are in a period of serious danger, given what we are seeing in the intelligence.”

The Taliban, which seized power earlier this month in a lightning campaign, has increased its military presence around Kabul airport since Thursday’s attack, adding to concerns that its fighters are blocking large numbers of Afghans eligible for evacuation from leaving.

The Taliban has set up multiple checkpoints on the approach to the airport to search and vet arrivals, carrying lists of would-be evacuees. Some are manned by heavily armed fighters brandishing US-issued weapons and tactical gear seized from the Afghan army.

The US evacuated 2,000 people over 12 hours on Saturday, bringing the total number of people it has evacuated or helped evacuate since August 14 to more than 115,000. But the Biden administration is still hoping to evacuate hundreds more, including around 300 American civilians who remain in the country.

With many experts warning that the administration will be unable to airlift out all Americans by Tuesday’s deadline, Sullivan said others would still be able to get out afterwards with the help of the Taliban.

“After August 31, we believe we have substantial leverage to hold the Taliban to its commitments and allow safe passage to American citizens, legal permanent residents and [our] Afghan allies,” he said.

French president Emmanuel Macron said on Sunday that France and the UK would begin a diplomatic push to create a safe zone in the Afghan capital for those attempting to leave the country, with a UN Security Council resolution due to be tabled on Monday.

“Our draft resolution aims to establish, under UN control, a safe zone in Kabul which would allow the continuation of humanitarian operations,” he told newspaper Le Journal du Dimanche.

“It’s very important. It would give a framework for the UN to take urgent action, and above all it would let us confront everyone with their responsibilities and allow the international community to maintain pressure on the Taliban.”

The Elysée later confirmed the plan to go to the UN regarding the “safe zone”. Diplomatic sources said France had received backing from Germany but Paris was still waiting for a response from Russia and China, also members of the UN Security Council.

Germany had not officially announced its support for the initiative but its foreign minister, Heiko Maas, left for the region on Sunday to discuss how to continue evacuations of German nationals and Afghan civilians.

“Germany’s commitment does not end with the completion of the military evacuation mission,” he said in a statement. He vowed to “work to ensure that international co-operation continues in this critical phase now beginning.”

Such efforts, he said, involved co-ordinating with neighbouring states on further evacuations and “includes the question of how civil operations can be resumed quickly at the airport. That entails a co-ordinated international approach to the Taliban”.

Biden travelled to Dover Air Force Base in Delaware on Sunday morning to formally receive the bodies of the 13 US troops who were among those killed by the blast on Thursday. The president was due to meet some of the families of those service members before their flag-draped transfer cases touched down in the US.

Additional reporting by Fazelminallah Qazizai in Kabul, Leila Abboud in Paris and Erika Solomon in Berlin