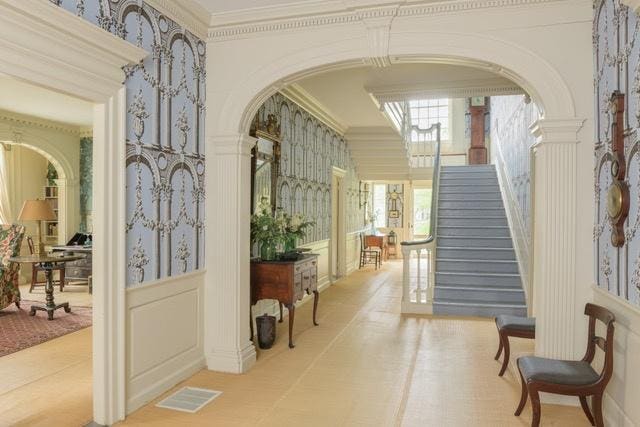 When Hamilton House was built in southern Maine around 1785, the invention of air conditioning was still over two centuries away. But this Georgian manor house stays remarkably cool on hot summer days, a function of its traditional design.

“It’s a matter of good air flow,” says Ben Haavik, Team Leader for Property Care at Historic New England, a museum that keeps 38 historic properties open to the public all over New England. Among them is Hamilton House.

“Good air flow was created by opposite windows, which 18th and 19th century buildings had. At Hamilton House, there are big doors at both ends of a large central hall. When they are both open, the air moving through keeps the house cool.”

Haavik points out that this mechanism, used in Georgian, Federal and Greek Revival houses in the Northeast between 1740 and 1850, is also what keeps countless ‘dog trot,’ or breezeway houses, cool. The dog trot, usually far more humble than Hamilton House, was common throughout the Southeastern United States during the 19th and early 20th centuries.

“Rooms were stacked atop each other around a central hall. You didn’t have to open each window, just enough to get the air moving.

“Then, by the 1860s,” he continues, “house design was moving into a new era, the Victorian. Houses became asymmetrical, with more complex interior layouts. But they were still quite savvy about keeping interiors cool in the summer: they added deep porches, which created a cool belt around the house. This was also the era of awnings, which created shade.”

He points to another innovative cooling device at the Eustis Estate, another Historic New England property. Built in 1878 in Milton, Massachusetts, the Victorian manor has a long underground tunnel that brings cool air into the house.

In Woodstock, Connecticut, stands Roseland Cottage, a pink Gothic Revival fantasia built in 1846 as a summer home. Another Historic New England site, it has a system that pulls in outdoor air and dehumidifies it.

“When we opened a few of our houses to the public after being shut down because of Covid, we knew that air circulation is one of the major factors in how the virus is transmitted,” Haavik says. “In historic properties, we are limited in how we can modify them and usually can’t install HVAC systems.

“In the past ,” he adds, “We kept windows shut to filter out particulate matter that could potentially harm the collections. Now we have learned that sometimes houses do better with windows open.”

At Hamilton House, the Eustis Estate and Roseland Cottage, as well as at other Historic New England properties, the natural air flow built into the houses, combined with air purifiers, proved sufficient to keep the air clean and fresh, conducive to the health of the houses as well as its human visitors.

Today, 28 of Historic New England’s properties are again open to the public. The information gleaned during the past difficult year has led to a whole new filed of research.

“Next week, we are installing monitors to determine how open windows affect air quality,” Ben Haavik says. “It will be interesting to see what we learn.”