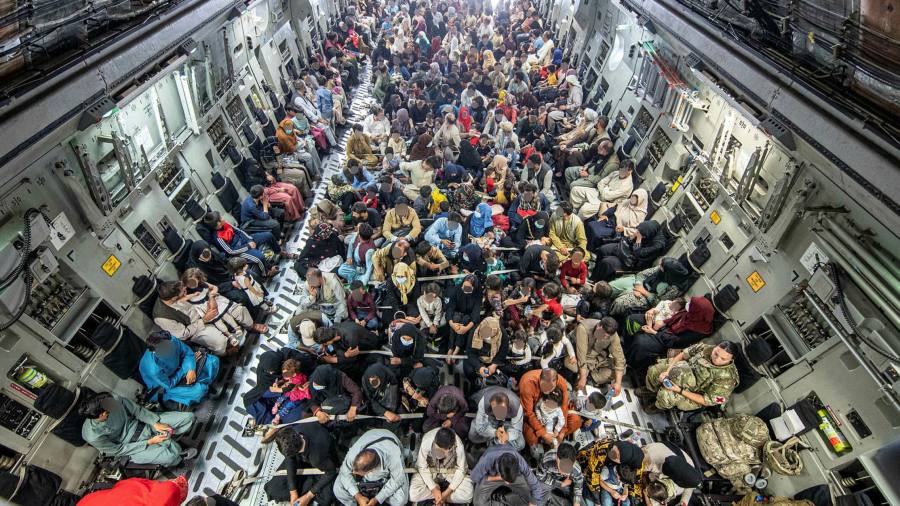 Nato members’ hopes that the US will extend the emergency evacuation from Afghanistan beyond August 31 were in doubt because of the risk of Taliban opposition, a British defence minister admitted on Monday.

James Heappey said the Taliban “gets a vote” on whether to allow the air bridge out of Kabul to continue beyond the deadline set for a total US troop withdrawal from the country.

Reuters reported two sources in the Islamist group now ruling Afghanistan as saying they would not extend the deadline beyond the end of the month.

UK prime minister Boris Johnson will on Tuesday urge the US to allow more time for the evacuation when he chairs a virtual G7 summit on the Afghan crisis and US president Joe Biden said on Sunday the issue was being considered.

But Biden, who last month said all US military operations would end on August 31, said on Sunday that he “hoped” to stick to the deadline.

Heappey said on Monday that the situation on the ground might not allow an extension as western powers grapple with chaotic scenes around Kabul airport, which is surrounded by Taliban checkpoints.

Heappey said that trying to use military force to extend the evacuation could turn Kabul into “a war zone” and make it even harder to extricate thousands of Afghans, western civilians and military personnel.

“Even if the political will in London, Washington, Paris, Berlin is for an extension, the Taliban may say no,” he told LBC Radio. “The Taliban get a vote as well and that’s why we’re continuing to work towards the 31st.”

He confirmed that there was also no prospect of Britain and other Nato allies sending in a new military force to hold Kabul airport after US forces leave. “When the US go, the mission has to come to an end,” he said.

Reuters cited Taliban sources as saying that no western approach had been made to extend the deadline and G7 leaders now face the grim reality that the new Afghan regime could turn down any request.

If the August 31 deadline remains in place, western politicians are trying to see whether more civilians can be evacuated by “squeezing” the schedule for the withdrawal.

Biden committed to the troop pullout after choosing to move ahead with an agreement the Trump administration sealed with the Taliban last year to end American military operations in the country ahead of the 20th anniversary of the September 11 attacks. The Islamist militant movement seized power shortly after launching a blitz across the country as US soldiers withdrew.

Under the original plans, London was working on the assumption that the military at Kabul airport would need a week to finalise their own departure.

That would mean the final evacuation of civilians, said by UK officials to number in “the low thousands”, might have been required to take place as early as Tuesday.

Planners now expect the flights can continue for the rest of the week, but Heappey confirmed it would not be possible to evacuate all British nationals and Afghans who have supported the Nato mission.

A second phase of the evacuation, in which Britain has agreed to resettle 20,000 Afghans over five years, would entail refugees seeking to arrive in the UK via third countries, such as Pakistan.

Johnson wants the G7 talks on Tuesday also to focus on a longer-term approach to the Afghan crisis but accepts, following the US retreat, that Chinese and Russian co-operation will be needed to stop a descent into chaos.

Britain is working with France on a UN security council resolution that might win the support of Moscow and Beijing. “It’s really important we have a united front,” said one British official. The security council is expected to meet later this week.

The resolution is expected to cover issues including counter-terrorism work, humanitarian aid and the terms on which the world engages with the Taliban. “We will judge them by their actions,” the UK official said.

The Federal Reserve is likely to hike interest rates again. What that means for you
Market Strategist Warns of ‘Blood’ on February 1 Ahead of Fed Meeting
EU to relax curbs on tax credits in response to US green subsidies
Silvergate Capital shares jump after BlackRock reports increased stake in the crypto bank
Illinois reverses decade-long fiscal tide in interim 2022 audit