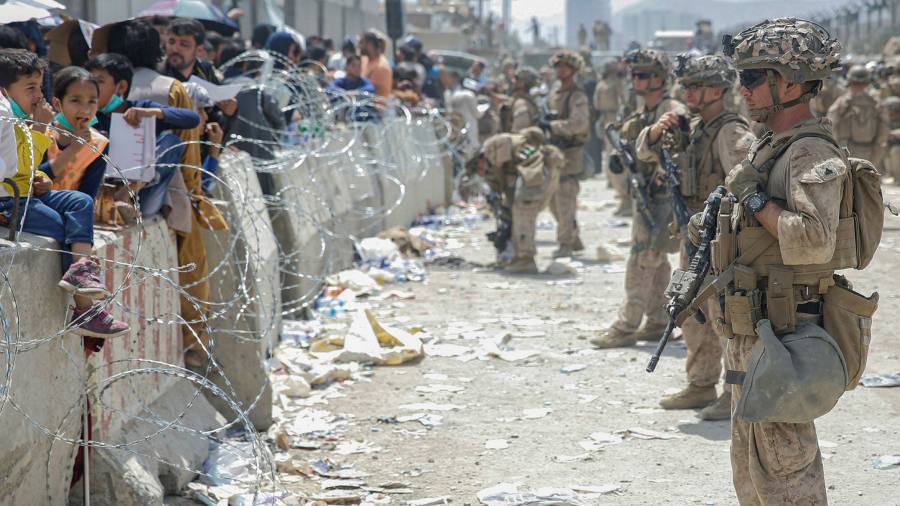 Boris Johnson, UK prime minister, will on Tuesday host crisis talks on Afghanistan with world leaders, as Britain presses the US to extend the evacuation timetable amid chaos and deaths at Kabul airport.

Johnson, as chair of the G7, will hold talks that will include evacuation arrangements for western nationals and Afghan citizens, with Britain saying that seven Afghans died in a crush near Kabul airport on Saturday.

Johnson also wants the G7 talks to focus on a longer-term approach to the Afghan crisis but accepts that following the US retreat that China and Russia are now key players in the region.

Lloyd Austin, US defence secretary, suggested on Sunday that US president Joe Biden’s August 31 deadline for a total American troop pullout might have to be extended.

Austin held talks with Ben Wallace, UK defence secretary. A UK official said the evacuation timetable was “tight” with the UK still trying to bring out people said to number “in the low thousands”.

Britain is working with France on a UN security council resolution that might win the support of Moscow and Beijing. “It’s really important we have a united front,” said one British official.

The resolution is expected to cover issues including counter-terrorism work, humanitarian aid, and the terms on which the world engages with the Taliban. “We will judge them by their actions,” the UK official said.

Dominic Raab, UK foreign secretary, told Britain’s Sunday Telegraph newspaper that the UK would “have to bring in countries with a potentially moderating influence like Russia and China, however uncomfortable that is”.

Downing Street has denied any rift between Johnson and Biden, but the British prime minister’s foreign policy — heavily dependent on the US — has been shaken by the crisis and has forced London to court other capitals.

While UK ministers were privately scathing about the manner of the US withdrawal, Tony Blair, the former UK prime minister who took British troops into Afghanistan 20 years ago, said Washington’s strategy was based on “an imbecilic political slogan about ending the ‘forever wars’”.

His comments were a reference to Biden’s promise to remove US forces from Afghanistan by the 20th anniversary of the September 11 terror attacks.

The US and the UK governments have come under intense criticism since the Taliban seized power a week ago in the wake of the American troop withdrawal.

A meeting of the five permanent members of the UN Security Council — China, France, Russia, UK and US — is expected to take place this week. “This is a big moment for the UN,” said one British official.

UK officials were moderately encouraged by a call last week between Raab and Wang Yi, his Chinese counterpart, but no call has yet taken place with Russia’s foreign minister Sergei Lavrov.

Some have argued that Johnson needs to recalibrate his foreign policy towards European allies after the bitterness of Brexit.

“One lesson we should draw is that if Britain and the EU countries in Nato want to play a significant role militarily we will need to work together closely to develop a capability which means we don’t have to depend on an American presence,” Damian Green, a former Tory cabinet minister, said. “The sooner we start along this path the better.”

A senior UK military officer agreed. “This government has put all its eggs — and the whisk and bowl — into the US basket,” he said. “The only ‘forever war’ Britain has is with the EU. It’s ridiculous.”

Johnson’s allies argue that the US has long been on a path to extricate itself from conflicts in Iraq and Afghanistan as Washington’s focus turns to Asia.

UK defence minister James Heappey said efforts to evacuate Britons and eligible Afghans from Kabul had improved over the past 24 hours, with more than 1,700 people airlifted out of the country. There are currently 1,000 British troops on the ground overseeing the airlift operation.