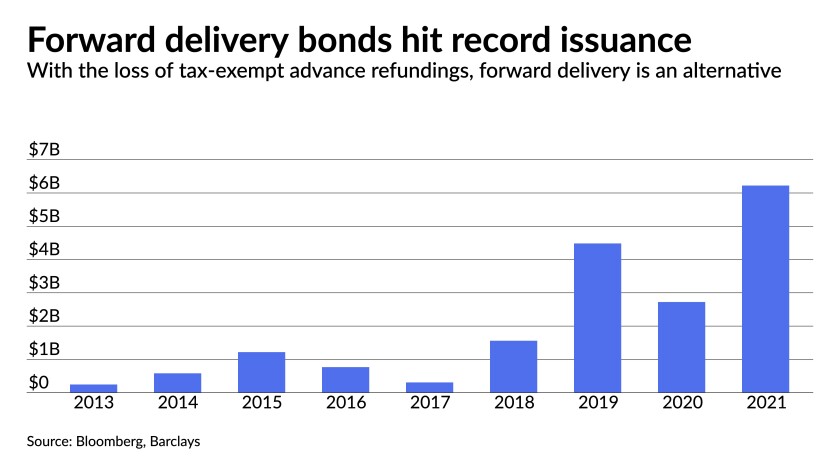 Forward delivery bonds have already surpassed their annual record for issuance as issuers use the tool, along with taxable refundings, to replace the loss of tax-exempt advance refundings.

Forward delivery bonds are attractive to both issuers looking for savings and investors seeking any incremental yield in an uber low-rate environment, Barclays PLC said in a Friday report.

The underwriting process is similar to a typical refunding transaction, but with an extended settlement date.

“Issuance this year is on track for a record year as issuers look to take advantage of record low tax-exempt rates and ratios,” said Barclays strategists Mikhail Foux, Clare Pickering and Mayur Patel in a weekly report. “Moreover, the tax-exempt curve has flattened and is close to levels seen two years ago, while the taxable curve has steepened in that same time frame, making forward tax-exempt refundings more attractive to some issuers than taxable advance refundings.”

At the same time, investors have “shown interest in forward deals as they have been more willing to go further out the curve to capture yield amid the rich rate environment,” they said.

“For example, the bonds are delivered to investors on the call date of the refunded bonds (assuming that issuers want a funding timeline similar to an advance refunding), which is also when the issuer receives the proceeds of the forward refunding bonds, which are then used to current refund the old bonds,” the report said.

The funding timeline can be similar to a traditional advance refunding transaction, which were eliminated by 2017 tax reform, except that there is no escrow period. A majority of deals done this year have had a three- to nine-month forward delivery period.

Another Connecticut issuer, the Metropolitan District, Hartford County (Aa3/AA//) has a $142.445 million of general obligation bond deal on tap, of which $12.914 million are GO refunding forward delivery bonds.

Connecticut, California and Washington had been big issuers of forward delivery bonds beginning earlier this year.

With the expectation that rates will rise, some issuers have been using forward delivery bonds to take advantage of historically low rates.

“For issuers worried about the direction of rates and market conditions, forward starting deals make sense because they are able to lock in net present value savings today, eliminating interest rate risk,” the report said. “From an investor perspective, they are able to pick up additional yield from the forward premium (currently 3-4 basis points/month, with lower-rated credits in the BBB area closer to 5-6 basis points/month), which they otherwise would not be able to do in today’s rich tax-exempt environment.”

There are some risks for issuers, which include termination of the forward delivery purchase contract by the underwriter for reasons affecting the issuer, such as a ratings downgrade, change in law, or an event of default, Barclays said.

The advantage from an investor standpoint, in addition to the potential for higher yields, is that the cash doesn’t have to be delivered until settlement is reached.

However, not all investors may be interested or allowed to invest in forward delivery bonds due to the risks mentioned above, hence their issuance is probably capped. Moreover, if advance refundings come back, this part of the primary market might be less active in the future.

That said, “for investors looking for opportunities to pick up yield in the current environment, we think forward delivery bonds make sense.”