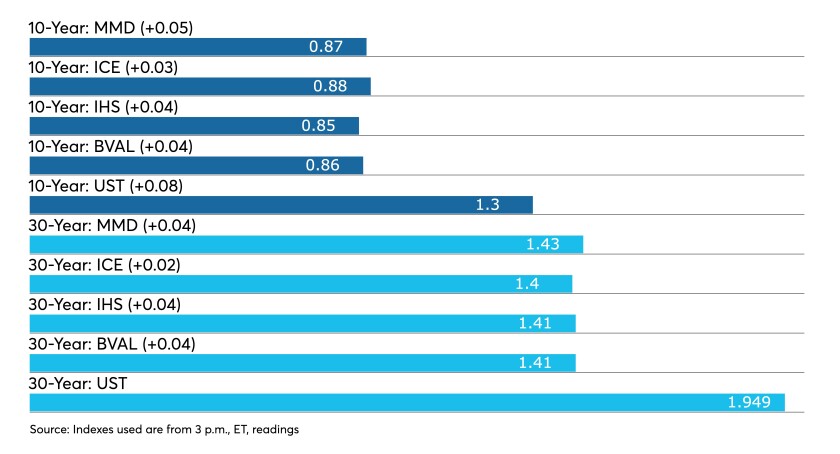 Municipal benchmark yields rose by as much as five basis points Friday, following a stronger-than-expected jobs report, but the asset class outperformed the moves in Treasury bonds. An increase in supply next week may test current low levels.

Continued strength in the economy was seen as nonfarm payrolls rose 943,000 and the jobless rate fell to 5.4% last month, the Labor Department reported.

“The dollar is surging following a better-than-expected nonfarm payroll report, which may have paved the way for the Fed to announce tapering if the economy delivers one more robust report in September,” said Ed Moya, senior market analyst for the Americas at OANDA. “The steepener trade is back as Treasury yields soar higher. The 10-year Treasury yield seems destined for 1.30%, with further upside likely targeting 1.35% over the next week or two.”

Much of muni performance will depend on UST performance. While municipals lagged Friday’s UST moves, they may play catch up with the increase in issuance next week along with large UST auctions.

Supply ticks up next week with the total potential volume at $7.677 billion. There are $6.162 billion of negotiated deals on tap and $1.514 billion of competitive loans. Thirty-day visible supply sits at $9.96 billion, according to Bond Buyer data.

In the negotiated market, the Allegheny County Airport Authority (A2//A/A+) leads the slate with $823.55 million of Pittsburgh International Airport AMT and non-AMT revenue bonds on Wednesday.

“Tax-exempt supply is still expected to be quite manageable, fund inflows are robust (although their pace has noticeably declined somewhat), but more importantly net issuance in August should be close to minus $15 billion, including the coupons,” Barclays strategists said in a weekly report.

Visible supply for taxable municipals has “declined to one of its lowest levels this year, as high-quality taxables have underperformed similar-rated corporates,” the Barclays report said.

“We see value in AAA and high-AA munis at current levels, as demand from life insurers will likely improve in the aftermath of changes in the NAIC risk-weightings,” according to Barclays.

“BBBs have been steadily outperforming corporates, propelled by credits in the Illinois complex. There are still some opportunities in the BBB bucket, but they are few and far between,” they said.

BofA Securities said in its weekly report that high-yield and BBB-rated bonds “not only performed best year-to-date, but we believe should continue to offer the best additional performance from here through year-end, especially the longer part of the curve.”

“Our coupon performance reviews shows that 4% coupons have been performing the bet across the board while 3% coupons have lagged, especially in the AAA space,” they wrote. “High-grade investors should focus on 3% coupons going forward to improve portfolio performance.”

While Friday’s jobs data was positive, the Delta variant threat remains. “It was nice to get some good news on jobs after rather disheartening headlines around COVID continue, but the market should keep those in mind before the bears start digging in,” a New York trader said. “We are starting to see the increased measures being put into place (masks and vaccine mandates) which to my mind, does not put me at ease on a continued robust economic pace.”

Strong jobs report eases pressure on the Fed
The U.S. economy gained more jobs than expected in July, continuing its strong rebound while the employment rate fell, news economists said could let the Federal Reserve begin tapering as early as this year.

Economists surveyed by IFR Markets had expected payrolls to have risen by 900,000 and the jobless rate to dip to 5.7%.

June’s number was upwardly revised to show a gain of 938,000 jobs, originally reported as an increase of 850,000.
The Labor Department noted large job gains were seen last month in the leisure and hospitality sectors and in local government education.

“Job creation is now surprising on the upside, with payroll gains averaging over 800,000 per month since May,” said Brian Coulton, chief economist at Fitch Ratings. “The employment to population ratio rose by 0.4 percentage points in July, the biggest one month jump since last October, helped by large gains in hiring in leisure and hospitality.”

He said the strong report could spur the Fed to act.

“If we get another print of near 1 million payroll gains for August, it’s possible that the Fed could start to view the progress being made in labor market recovery as being ‘substantial,’ Coulton said. “With clearer evidence of wage growth picking up, the tapering of Fed asset purchases is looking more and more likely to happen this year now.”

“Labor market conditions in July show that more and more people are getting back to work, working longer and earning somewhat more,” said Christian Scherrmann, DWS Group’s U.S. Economist. “Today’s upside surprise should strengthen the confidence in labor market recovery and brings the Fed just another step closer to declaring ‘sufficient further progress’ — something that we see as likely in September.”

Some noted the continued strength in the economy.

“Coming on the heels of June’s already strong numbers, which were also revised higher, that now makes two months in a row of close to 1 million jobs created,” said Sameer Samana, senior global market strategist at Wells Fargo Investment Institute. “This reinforces our view that the labor market is on solid footing and will be the main driver of economic growth (via consumption). It also keeps the Fed on track to taper bond purchases towards the end of 2021/beginning of 2023, which should put upward pressure on long-term interest rates.”

The decline in the unemployment rate came as the number of unemployed persons fell 782,000 to 8.7 million.

“These measures are down considerably from their highs at the end of the February-April 2020 recession,” the Labor Department said.

However, it noted the remained well above their pre-COVID-19 pandemic levels of 3.5% and 5.7 million in February 2020.

In July, employment in leisure and hospitality increased by 380,000, with two-thirds of the gains being in food services and drinking establishments. Employment also continued to increase in accommodation and in arts, entertainment and recreation.

Despite the growth, employment in leisure and hospitality is down 10.3%, or by 1.7 million, from February 2020 levels.

“The fact the US economy is bubbling away and ready for a period of expansion is now the worst kept secret in global markets,” said Erez Katz, CEO of Neuravest Research. “July’s data has just poured a whole lot more fuel on the fire for inflation hawks as legions of workers who were previously inactive return to take up jobs in sectors now finding their feet again, particularly in the leisure and hospitality industries.”

The size of the U.S. force has been holding steady, so it appears July’s gains were driven by unemployed workers looking for and finding jobs.

“Recent weeks have seen large drops in workers on unemployment rolls, particularly in the states that have ended participation in the enhanced federal unemployment benefits,” said Noah Williams, adjunct fellow at Manhattan Institute, and Juli Plant Grainger, professor of economics at the University of Wisconsin, Madison.

However, they said the trends of growth in food services and education employment are threatened by the increased virus spread with the Delta variant and re-imposed public health restrictions in response.

“September had looked to mark a larger upturn in the economy, with the full expiration of unemployment benefits and the return to schooling and easing of childcare pressures. But that upturn is now in doubt,” they said.

“The jobs report was excellent,” said Nancy Tengler, Chief Investment Officer of Laffer Tengler Investments. “I believe part of the reason is the cessation of supplemental benefits in many states. I split my time between Nevada and Arizona. Arizona stopped the benefits on July 10 — not a help wanted sign anywhere. In Incline Village in Nevada virtually every establishment has a help wanted sign in the window — gas stations, grocery store, post office, pet store, coffee shop, you name it. Supplemental benefits are still in place.”

Additionally, some say inflation may be finally making its big return.

“Advancing wage growth capable of rapidly firing up consumer spending is making it increasingly likely the central bank will need to respond sooner rather than later,” Katz said. “Those proclaiming that soaring inflation is temporary will continue to shift uncomfortably in their chairs. Nowhere is inflation straining at the leash quite like in the U.S., a powerhouse of an economy that still has the power to set the agenda that others follow.”

In the negotiated market:

The City of Lubbock, Texas (A1/A+/A+/) is set to price on Thursday $254.32 million of electric light and power system revenue bonds. BofA Securities.

The University of North Dakota is set to price on Thursday $130.4 million of certificates of participation. Stifel, Nicolaus & Company, Inc.