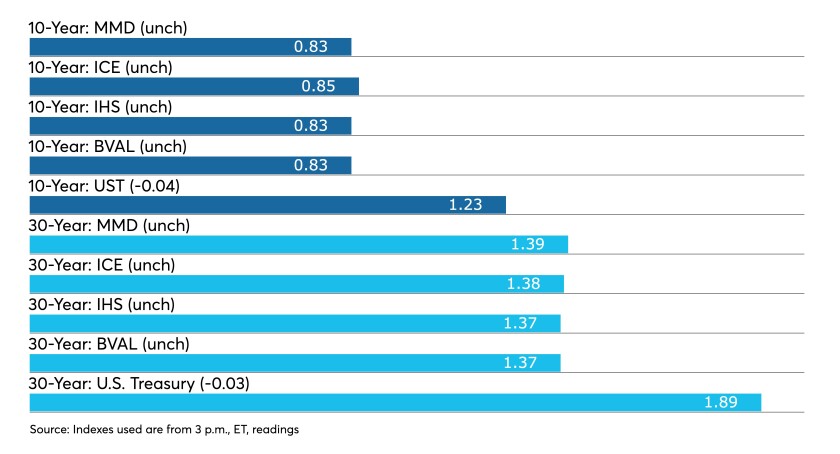 Triple-A benchmarks were little changed on Friday while U.S. Treasuries ended the week stronger amid mixed economic data. Muni participants await a new month with growing issuance, but perhaps not quite enough as issuers are hesitant to add more debt before final word from Washington on infrastructure.

July issuance came in down year-over-year but about 13% above its 10-year monthly average at $31.9 billion. Issuance still lags demand by a large amount — $60-plus billion by many accounts for August — as redemptions and coupon payments amass.

“What have portfolio managers been doing with all the funds they receive since demand has been substantially larger than net supply? Empirical evidence suggests that some funds managers have been allocating slightly higher percentages of their portfolios to corporates, taxable munis, Treasuries and other instruments,” BofA Securities said in a weekly report. “In some cases, these percentages are quite close to 10% of their portfolios. Yet, many mutual funds still invest almost exclusively in munis. As we believe muni/Treasury ratios will remain consistently low, that diversification into taxables may become more pervasive.”

BofA Securities strategists noted that while their $43 billion volume expectations were not met in July, refunding volumes as a percentage of the total, particularly taxable advance refunding volumes versus tax-exempt volumes in July, “rose quite a bit compared to the past few months, despite low muni/Treasury ratios.”

“This suggests to us that Treasury rates levels, not ratio levels, are the critical factor in taxable advance refunding deals,” they said.

At this point, the pool of existing tax-exempt refunding bonds which could be advance refunded by taxable bonds is greater than $100 billion, they said.

If a rising volatility environment results in persistent low Treasury rates in the coming months, “we see scope for more taxable advance refunding deals to come to the market.”

Given that the infrastructure package being debated in Washington lacks tax-exempt advance refundings and direct-pay bond provisions, some issuers may choose to advance refund existing new-money deals as well instead of waiting for the potential reinstatement of the traditional refunding option, BofA said.

“In what really is a perfect technical opportunity for issuers to sell debt, they just aren’t to the degree that investors would like, but I’m not sure I can blame them. You’ve got mixed messages (to put it nicely) coming out of Washington on a near daily basis, and they’re still sitting on bundles of federal aid,” a New York strategist said. “In the very near-term, even if investors are screaming for more paper, rates are insanely low and play to their favor, the issuers are not biting.”

Going into August, BofA’s original expected total issuance for the month is $40 billion.

“If taxable bond issuance indeed rises, then the total volume will likely be higher,” the strategists said.

Tamer inflation
Although inflation remains high, some measures in Friday’s indicators were below expectations, while consumers continue to propel the economy.

“Today’s batch of economic releases were right down the middle, [with] strong consumer spending, but inflation, while elevated, was tamer than expected,” said Matt Peron, director of research at Janus Henderson Investors. Friday’s numbers “should calm some of the worst-case inflation fears, at least for now.”

Personal income ticked up 0.1% in June after decreasing by a revised 2.2% in May, first reported as a 2.0% decline, while spending gained 1.0% after dropping a revised 0.1% in May, originally reported as an unchanged level.

Economists polled by IFR Markets expected a 0.3% drop in income, a 0.7% increase in consumption, a 0.6% climb in core PCE for the month and 3.7% growth in core PCE on an annual basis.

The data are “clear evidence that persistently high inflation is cutting into real disposable income and consumption,” said Berenberg chief economist for the U.S., Americas and Asia Mickey Levy. “Clearly, inflation has risen higher than earlier forecasts and has persisted longer.”

Levy sees employment and wage gains ahead, which “will contribute to rises in personal income and consumption, but that inflation will remain elevated.”

However, she noted, the Delta variant could “put a damper on spending gains in August,” although “consumers defiantly kept spending, even during a surge in outbreaks.”

Of concern to Swonk, “The saving rate was drawn down much faster than expected and could pose more of a headwind.”

Also released Friday, the University of Michigan’s final July consumer sentiment index rose to 81.2 from the preliminary read of 80.8 but lower than June’s final 85.5 read.

Economists estimated a reading of 80.8 for sentiment.

“While most consumers still expect inflation to be transitory, there is growing evidence that an inflation storm is likely to develop on the not-too-distant horizon,” said Richard Curtin the chief economist for the survey. “The improved finances of consumers have greatly reduced consumers’ resistance to price increases.”

Also released Friday, the employment cost index climbed 0.7% in the second quarter after a 0.9% jump the prior quarter, wages and salaries rose 0.9% after a 1.0% increase a quarter before, and benefits costs gained 0.4% after rising 0.6% in the prior three-month period.

Economists predicted the index would gain 0.9%.

“The employment costs rise was slower than expected amid a weakening in benefits growth and lackluster private wage growth relative to the recent readings on average hourly earnings,” said Sarah House, senior economist at Wells Fargo Securities. “Nevertheless, labor costs are up 2.9% over the past year and match the high watermark of the past cycle, as inflation pressures have broadened out.”

Separately, the Chicago Business Barometer increased to 73.4 in July from 66.1 in June.

Of the five main categories production and new orders saw the largest gains in the month.

The price indexes “remained at historically high levels,” according to the report. “Higher prices for materials and freight were again a major concern for survey respondents.”