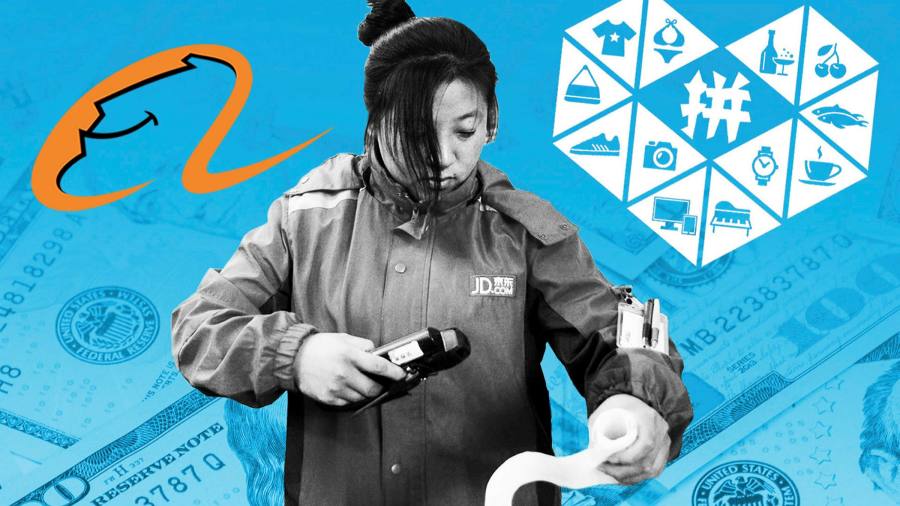 The value of Chinese shares on Wall Street has soared from just a few billion dollars to $2tn over the past two decades as investors turned a blind eye to the precarious legal structure underpinning many of the country’s biggest US listings.

But a crackdown by Beijing on China’s $100bn tutoring industry over the past week has included a ban on companies using this structure, known as the variable interest entity (VIE), raising the spectre of a broader disaster for some of the world’s biggest investors.

The move has wiped tens of billions of dollars off the market value of New York-listed Chinese companies on fears that the ban on tutoring VIEs could extend to other sectors.

The ban and an ambiguous warning that existing education VIEs will be “rectified” have triggered fears that other VIEs could be hit, such as Alibaba, Pinduoduo and JD.com. Since Friday, the Nasdaq Golden Dragon China index has fallen 15 per cent.

Chinese VIEs, usually based in tax havens such as the Cayman Islands, are essentially holding companies designed to get around strict rules that forbid foreign investors from any ownership over key sectors, such as tech. In theory, they entitle US shareholders to the economic benefits flowing from a Chinese company while limiting their operating control of the business.

“Investing in VIEs is a take it or leave it mentality,” said one person close to the New York Stock Exchange. “The owner does not have a legal right to the underlying entity, but it is the only way to get access.”

Until now, both Beijing and US investors, such as BlackRock and Fidelity, have been happy to gloss over the risks of the structure, with VIE-backed shares growing in value to about $2tn, according to the US National Bureau of Economic Research.

But this week’s shock announcement has animated long-term critics of the structure, who have voiced concerns China could widen the crackdown on education company VIEs to other sectors.

Dan Harris, attorney at Bricken Harris, an international law firm that has warned clients on the legality of VIEs for more than a decade, said the Chinese Communist party has “lashed out at big companies and now all signs point to them going after VIEs”.

“If I had any money in any sort of VIE right now, I would be very unhappy,” he added, adding that investors seeking redress for losses have limited options. “It is very unlikely they [investors] get all of their money back. Legally they are on quicksand.”

US regulators have not approved any new listings of Chinese companies in recent weeks, amid the uncertainty surrounding VIEs and China’s wider regulatory clampdown.

On Tuesday, Reuters reported that SEC official Allison Lee said Chinese companies listed in the US would be required to disclose the risks of China interfering in its business as part of their reporting obligations.

The risks of investing in VIEs are well-known. When Alibaba listed in New York in 2014 it devoted three pages of its prospectus to the potential problems with its VIEs.

The attack on private tutoring groups this week is not the first time China has forbidden an industry to use VIEs. In 2009, regulators announced restrictions on the use of VIE listings by online gaming companies, yet enforcement has been almost non-existent, with streaming and online games company Bilibili listing on Nasdaq in 2018.

But the developing battle between Beijing and the US over Chinese overseas listings has knocked the trust on which they depend. “VIEs are inherently risky and unenforceable — foreigners suspend disbelief to participate in the Chinese growth story,” said Tim Clissold, an experienced China investor.

The battle deepened when US regulators threatened to delist Chinese companies that did not open up their auditing process to scrutiny. China, meanwhile, has passed a new data security law that forbids companies from handing over any data to foreign officials without government permission.

Earlier this month, the Chinese ride-hailing company Didi became a high-profile victim of the tensions when Beijing took aim at its data security just after it listed in New York. Its shares have fallen over 40 per cent since.

“Uncertainty is so high and so unpredictable, the protocol of just disclosing risks during the IPO process may not be enough [to protect investors in New York],” said one senior IPO lawyer at a US firm in Hong Kong. He added: “The ball is in the Chinese government’s court. The US is reacting to this but they’re not driving it.”

But some believe China’s renewed focus on VIEs could prove positive if it results in greater clarity from regulators on what structure Beijing prefers for foreign listings.

“This has been going on for 25 to 30 years. The government has made it harder and harder over the years to set up an offshore structure [but], over time, people figure out ways to deal with every hurdle the government throws up,” said Marcia Ellis, a partner at US law firm Morrison & Foerster.

Fredrik Öqvist, a specialist in risk including VIEs, said new rules requiring a security review of foreign listings plans by companies with data on more than 1m users could end up granting official recognition to the popular structures.

“If anything actually comes through that review it would probably be the first time a VIE structure has some form of official approval,” Öqvist said.

The Hong Kong-based IPO lawyer suggested that the government was likely to give itself “greater powers to preserve the right to say no”.

“They will probably gain new tools to regulate these companies but that doesn’t mean they will necessarily ban the whole structure as the consequences would be too significant. But we just don’t know yet.”

Britain Announces Plans for ‘Robust’ Crypto Rules, Launches Consultation
ESG: what issuers and market participants should strive for in 2023
Experts Predict Future Regulation of Crypto Exchanges by 2025, With Split Opinion on Similarity to Traditional Finance
New York AG will seek sanctions on Trump, lawyers over ‘false’ court filings in fraud suit
The Federal Reserve is likely to hike interest rates again. What that means for you