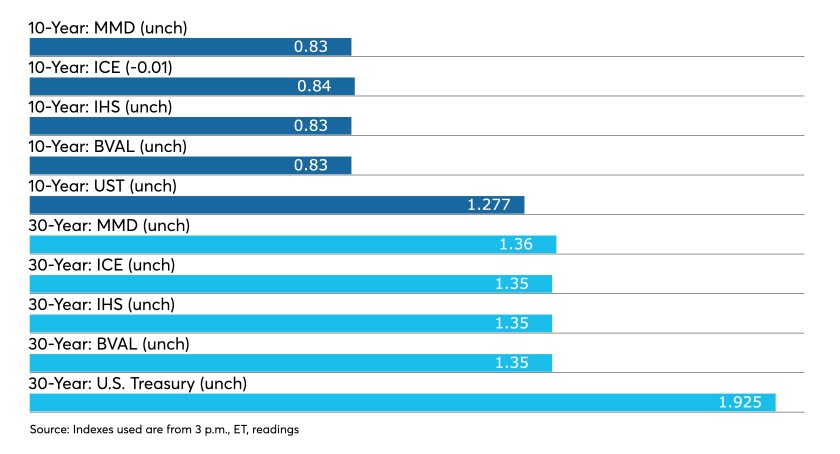 Municipals were stronger on the short end, hitting record low levels for the second time this year, in quiet trading while U.S. Treasuries were treading water and equities did much the same as all markets await Wednesday’s Federal Open Market Committee meeting announcement.

All triple-A benchmark curves had the one-year at 0.05%.

Bloomberg BVAL saw its two-year also at 0.05%, a record low for the benchmark.

Not until a 2028 maturity does any material difference come into play down in credit, she notes, while implied intermediate AA revenue spreads begin to separate from AAA counterparts.

Out longer, current spreads indicate value of about 25 basis points in 30-year AA revenue bonds over AAA GOs, she said.

“With the Bond Buyer 20 GO index at a near-historic low (2.03% YTM) as an example of the reach for yield, incremental pickup has become more valuable,” Olsan said.

Housing headwinds
Signs of softness in the housing market, caused by lack of supply, could have another headwind on the horizon, should the Federal Reserve decide to taper its purchases of mortgage-backed securities quicker than expected.

“Builders are racing to keep up with the pace of demand and we are seeing supply-side shortages, not only with materials but also with skilled workers,” said Mike Fratantoni, senior vice president and chief economist of the Mortgage Bankers Association. “And the lack of supplies is limiting their ability to quickly bring new homes.

The Federal Open Market Committee will discuss when to begin tapering its asset purchases at its meeting this week. The minutes of the previous meeting indicated some members targeted MBS purchases as a better fit for curtailing the Fed’s asset-purchases that support the economy, because rising home prices suggest real estate doesn’t need continuing support.

Since the Fed promised to give “plenty of notice” before tapering, he said, it won’t matter for the real estate market if MBS buys are cut before or quicker than Treasuries.

“We forecast the mortgage rate to go up to around 3.5% by the end of the year, it is currently around 3%,” he said. “That level will not harm the housing market and honestly, a little cooling of the market would be welcome.”

The Fed’s MBS purchases are not impacting the supply side, which is where the market has issues.

The May figure was originally reported as 769,000.

“Homebuyers, especially first-time buyers, have been sidelined by price rises that have outpaced income growth,” Grant Thornton’s Maleyev said. “Builders, faced with significant supply constraints for everything from land to labor to materials, have been unable to match the pace of demand during the first half of 2021; many have paused projects to wait out shortages.”

The employment index rose to 23.7 from 22.9, wages and benefits dipped to 46.0 from 48.1, while prices paid for raw materials dropped to 73.5 from 80.8 and prices received for finished goods fell to 40.9 from 42.8. The price indexes “eased off the all-time highs reached last month but remained strongly elevated,” according to the Fed.

The Massachusetts Institute of Technology (Aaa/AAA//) is set to price $225 million of corporate CUSIP bonds on Tuesday. Barclays Capital Inc.

In the competitive market, King County, Washington, will sell $334 million of general obligation bonds at 9 a.m. eastern on Tuesday.