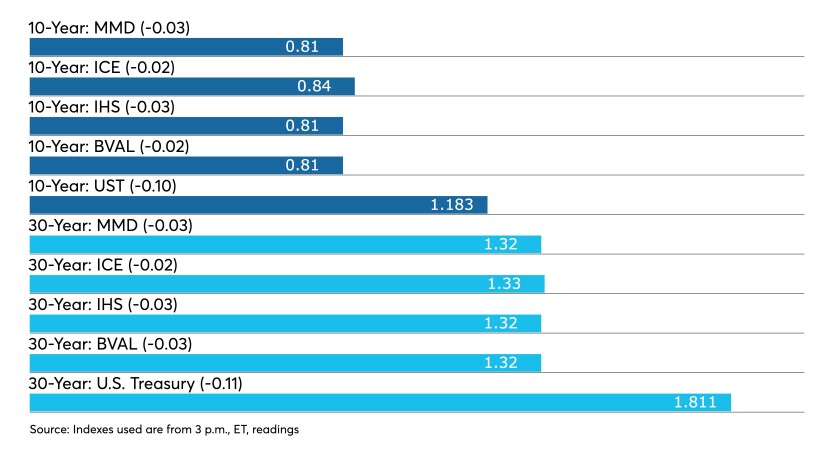 Municipals underperformed a flight-to-safety rally in U.S. Treasuries as COVID-19 and its variants surge around the globe, pushing edgy investors to flee the stock market, as some contemplate the idea the economic recovery has peaked, and will potentially regress from the virus’ effects.

Municipal triple-A benchmarks were pushed to lower yields by one to three basis points across the curve, with the bigger moves out long, but still vastly underperformed the 10-plus basis point moves in UST.

“With the calendar we’ve got this week, I’m not surprised munis took a wait-and-see-approach,” a New York trader said. “We’ve really decoupled with UST generally since the March selloff and given how volatile govies have been of late, it makes sense for our market to see how far USTs go.

“Is this a one-day stock market pull-back or will we see the flight to safety continue? Tuesday is the day we will see the muni reaction to this rapid move,” he said.

Investors await a big competitive day on Tuesday which should also help to direct benchmark yields. The New York Thruway Authority, with its nearly $2 billion worth of loans and its AA-plus ratings from S&P Global and Fitch Ratings, may be telling for how rich the market will allow double-A credits to get and how tight spreads can go.

“Double-As have already tightened substantially this year and we’ve already seen them trade through triple-As in the secondary inside 10-years. It reiterates the need to reach out the credit spectrum for any yield and really is a boon to issuers,” the trader said.

Inflation debate redux
While Federal Reserve officials stick to their position the current spike in inflation is transitory, two economists suggest rising wages and the increasing money supply will prove them wrong.

Wages remain the biggest upside risk to inflation, said Nanette Abuhoff Jacobson, Global Investment Strategist at Hartford Funds. If people choose not to work for whatever reason, labor “shortages may persist and that’s why companies are raising wages and if wages go up, that has a ripple effect on prices for everything you pay for.”

“If you shut down economies for over a year and print money like a madman, you are going to get inflation,” he said. “And now that the layman can see this, the United States has entered a period of higher inflation expectations.”

When inflation expectations rise, Hodgson said, the cost increases become “embedded in contracts [and] price projections — including wages,” making it difficult to undo the “temporary” increases.

Abuhoff Jacobson said she would consider price pressures transitory if they lasted less than a year. But, she sees inflation between 2.5% and 3% next year, much higher than the Fed’s 2.1% expectations.

While some categories that have boosted inflation should dissipate in the next half year — hospitality, leisure and travel, and used car prices — the ones caused by supply-chain bottlenecks won’t be transitory since they “could take more than a year to resolve.”

But other groups, including “commodity prices, housing, rent, shelter and wages will be much sticker,” she said, and could take three years to decline.

As the population ages, “the need for federal deficits and consequent monetization will only grow,” which will be inflationary, Hodgson said. Further, he is concerned about the decline in the labor participation rate.

But Patrick Reid, co-founder at Adamis Principle Ltd., noted that while he believes the Fed is correct, the picture will clear later in the year. “September and October will be crunch time. That is when the [added $300 a week unemployment] benefits stop and schools go back.”

At that point, “we may very well be looking at either a monumental jobs report or a scant one,” he added. “We do not know.”

Separately, the National Association of Home Builders’ housing market index dipped to 80 in July from 81 in the prior month.

Economists polled by IFR Markets estimated a reading of 82.

“Builders are contending with shortages of building materials, buildable lots and skilled labor as well as a challenging regulatory environment,” said NAHB Chief Economist Robert Dietz. “This is putting upward pressure on home prices and sidelining many prospective home buyers even as demand remains strong in a low-inventory environment.”

The San Francisco City and County will sell a total of $469 million of tax-exempt and taxable general obligation bonds.

The issuer will also sell $95.2 million of taxable transportation and road improvement bonds at 11:30 a.m.