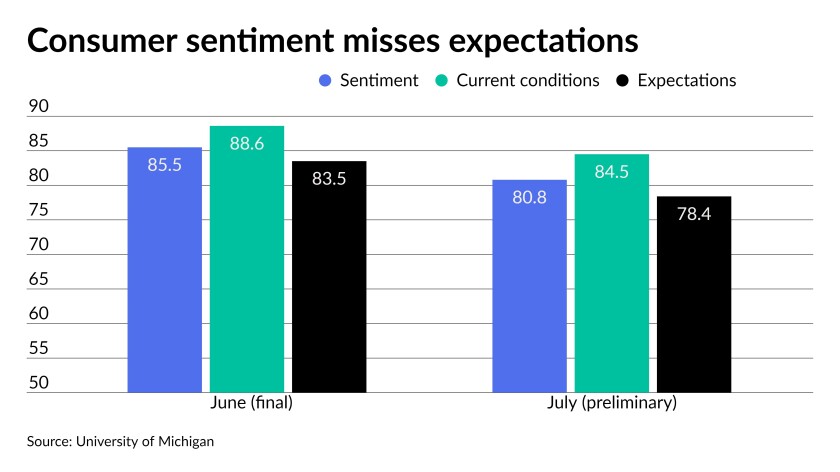 Municipals ended the week steady along with U.S. Treasuries ahead of one of the more diverse and chunky calendars the summer has seen while supply still simply isn’t keeping up with demand, which should keep municipal yields in a tight range.

The total potential volume for next week is estimated at $9.033 billion, up from total sales of $5 billion this week.

The competitive calendar beefs up, led by nearly $2 billion from the New York Thruway Authority on Tuesday, joined by large deals from San Francisco and North Carolina.

The negotiated calendar is led by a $600 million-plus pension bond deal from the Oregon Education District and two transportation credits from the Los Angeles County Metropolitan Transportation Authority and the Pennsylvania Turnpike Commission.

That supply, however, is still less than the massive amounts of cash on hand. Bond Buyer data shows 30-day visible supply at $12.53 billion.

Since the end of June, fundamentals have become more entrenched.

“Supply is not keeping pace with rollover needs and new money cycling in — a case of supply and demand in its purest form,” said Kim Olsan, senior vice president at FHN Financial. “Distorted credit spreads have developed as a byproduct of too little supply.”

She pointed out that low-AA/single-A airport names in the five-year area are trading at less than +5/AAA.

“The reason is that new-issue allotments are failing to keep pace with order flows that are multiple times the number of available bonds,” Olsan said. In addition to the rollover volume, mutual fund inflows are adding more demand at a clip of $2 billion per week, she added.

After a short pause at the end of June, “muni buyers have returned, and tax-exempts outperformed despite a rally in Treasuries,” according to a Barclays PLC report.

The yield curve continued to flatten, with the five-year point doing especially well, outright and compared with Treasuries, they said.

“In our view, the flattening trend will remain firmly entrenched until the hiking cycle gets closer,” Barclays strategists Mikhail Foux, Clare Pickering and Mayur Patel wrote. “The 20-year part of the curve is getting especially rich. … We prefer longer-dated bonds instead.”

Olsan noted the changes to that part of the curve since the March sell-off, when a 50 basis-point increase from mid-February’s lows occurred, putting the 20-year AAA above the 10-year UST.

“By June, the 10-year AAA/UST gap had widened to 60 basis points as govies reacted more broadly to inflation fears and the crush of money in munis began to be felt,” she said. “The 20-year AAA spot moved through the 10-year UST by nearly 20 basis points.”

After this week’s price action, all high-quality tax-exempts became quite rich again, both outright and versus Treasuries, Barclays and others noted, which might push investors toward taxables.

“At current ratios, we do not see that much value in them, but high-quality taxable munis could provide an alternative for some investors,” Barclays said. “The yield differential between tax-exempts and taxables has started to increase again, yet another reason while taxable spreads remain well-supported, as some tax-exempt buyers might look into taxables instead.”

“University of Michigan sentiment dropped significantly, while inflation sharply rose across the board,” said Ed Moya, senior market analyst for the Americas at OANDA. “The U.S. consumer is so far unfazed by higher food, energy, cars, and restaurant prices.”

But, he added, anecdotal evidence suggests that will end.

“Everything we are hearing from earnings season (Conagra and Pepsico will pass on price increases) or even Treasury Secretary [Janet] Yellen (sees several more months of rapid inflation) seems to suggest we will still see inflationary pressures throughout the rest of the year,” he said.

Friday’s data, he said, ” sets up a very strong second quarter GDP reading, but financial markets will doubt that trend can continue as inflationary pressures intensify.”

The University of Michigan preliminary July consumer sentiment index decreased to 80.8 from June’s final of 85.5.

Economists polled by IFR Markets estimated a reading of 86.5 for sentiment, 90.0 for current conditions and 85.0 for expectations.

“The consumer sentiment report showed rising complaints about pricing pressures and that was clearly reflected in both inflation expectation forecasts,” Moya said. “Growth concerns from inflationary pressures will start to become a drag on sentiment and that might make it hard to remain upbeat with the U.S. consumer.”

Consumers are again “enjoying their new freedom to go out and spend on the pleasures they were denied during lockdown,” said Erez Katz, CEO of Neuravest Research.

“But the progress risks being undone by surging inflation, which has climbed to a 13-year high,” he said. “The Fed has shown no desire to hike interest rates yet, but that prospect is a cloud on the otherwise bright, big-spending horizon.”

Also released Friday, business inventories climbed 0.5% in May after a revised tick up of 0.1% in April, originally reported as a 0.2% decline.

The business climate index gained to 6.5 from 1.0, “its first reading meaningfully above zero since January 2020, indicating that, on net, firms viewed the business climate as better than normal for this time of year,” the report said.

The San Francisco City and County will sell a total of $469 million of tax-exempt and taxable general obligation bonds.

The issuer will also sell $95.2 million of taxable transportation and road improvement bonds at 11:30 a.m.