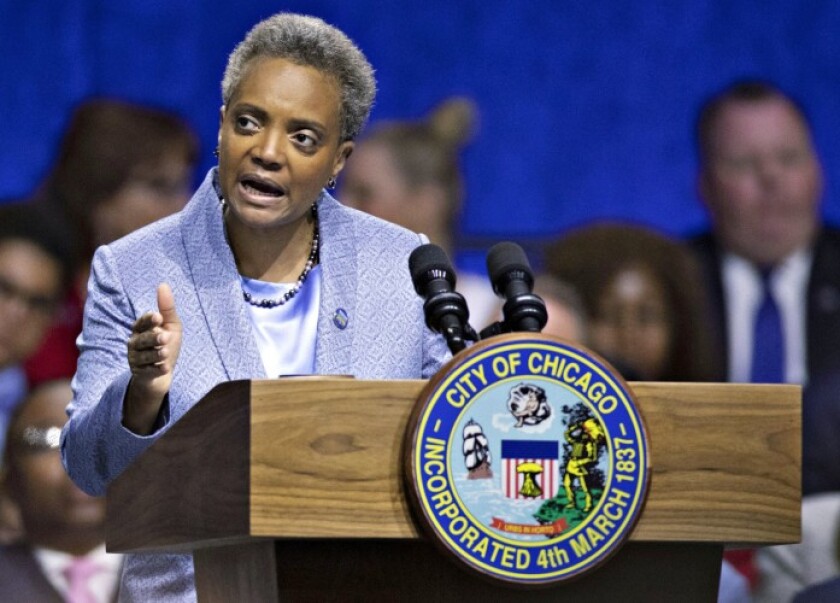 Illinois Gov. J.B. Pritzker will sign newly-passed legislation handing mayoral control of the Chicago Public Schools to a fully-elected school board by 2027 even as negotiations continue over some board rules and the impact on the city’s $500 million in annual financial obligations.

The package laid out in an amendment to House Bill 2908 was labeled by its sponsors as a compromise from the previous proposal as it does not move the junk-rated Chicago Board of Education immediately to a fully-elected, 21-member board as originally proposed.

It moves the district for the first time in its history to a partially-elected board in 2025 with 10 elected members and 11 appointed by the mayor and then to a fully-elected board in 2027. Mayor Lori Lightfoot remained staunch in her opposition as did the Chicago Civic Federation raising qualms over the city’s continued financial links to the district in the absence of a mayoral role – a position that market participants generally support and are concerned the change could jeopardize the district’s fiscal progress in recent years.

The legislation cleared the Senate last week and the House passed it 70-41 on Wednesday. The House sponsor, Rep. Delia Ramirez, D-Chicago, put a temporary hold on the bill so it won’t immediately go to Pritzker’s desk. Negotiations will continue on a trailer bill that would address some but not all of Lightfoot’s arguments against the package.

“I’ve said all along that I would” sign legislation moving Chicago to an elected board, Pritzker said Thursday when asked at a public appearance. “As a candidate I said I was in favor of an elected school board. I thought it was important though that there was a compromise reached” and the legislature “produced one and I will sign it.”

Lightfoot had pressed for a version that moved the current seven-member board that is fully appointed by her to an 11-member structure with a majority of members still appointed by her. Lightfoot on Thursday called the legislation approved Wednesday “deeply flawed” although she hopes to resolve some of her objections.

“The sponsor in the House filed a motion to reconsider. That puts the bill on hold. We already reached out and we plan to continue negotiations…so I do see a path forward,” Lightfoot said when asked about the subject during a public appearance Thursday. “My hope is we will come together quickly and work on a trailer bill that we can present to the members of the General Assembly in the veto session.”

While Lightfoot had supported an elected board during her 2019 campaign, she opposes the proposed size, which would be the largest in the country, on the argument that it would be too “unwieldy.” She also wants restrictions on the new board’s ability to set its own compensation levels, wants guard rails on campaign spending to avoid allowing special interest groups like labor too wield too great an influence on the board, and wants to expand board eligibility to non-citizens.

The district’s reliance on about $500 million of city taxpayer support also has played a central role in the city’s opposition. “The fact that the bill doesn’t account for the fact that the city of Chicago provides $500 million annually” is not addressed, Lightfoot said Thursday.

The city made $124 million in fiscal 2021 pension contributions for non-teacher school district employees. The district also this year received $142.3 million from a dedicated property tax levy used to pay for some debt service funding, $39.7 million to fund certain CPS capital projects, $12.5 million in grants for programs such as early childhood development, and $96.9 million in city-declared tax increment financing surplus revenues.

The payment method on some of the sources is deeply entrenched either by a levy or through state statute so is not easily unwound although others sources are not. One administration source said it’s not the city’s position that the city should withdraw financial help to the district but said the obligation gives the city a right to hold a long-term seat at the table to protect taxpayers.

Chief Financial Officer Jennie Huang Bennett, who served as CPS CFO before taking the city job in 2019, and federation President Laurence Msall laid out their fiscal and governance worries during a committee hearing ahead of the House debate.

“Trying to push through this legislation now is leaving this very important question unresolved,” Bennett told the Ethics and Elections Committee, adding under questioning that “it’s very likely” funding will be reduced in the future.

The legislation calls for the board to conduct an independent financial review of the district and city’s fiscal “entanglements” that will consider the “Chicago board’s ability to operate with the financial resources available as an independent unit of local government,” Ramirez said. The review will to go the state board of education before the first elections in 2024 and recommendations over potential legislative changes needed will go to lawmakers. “It is time for an elected representative school board.”

GOP members raised concerns that it’s the state that will have to foot the bill should the city eventually back out of some of its obligations given that the district is limited in its revenue-raising options due to state property tax caps. Some called for the vote to be delayed with so many issues still being negotiated for a trailer bill.

“We should not be passing legislation where the trailer bill actually is the more substantive and complete legislation,” said Rep. Ryan Spain, R-Peoria.

Ramirez said her intention is to address the campaign finance issues and ability of undocumented residents to run in the trailer bill along with banning compensation but the 21-member size will remain. Pritzker said he would have liked to see a smaller size but also understood supporters’ argument that the large number drawn from individual districts benefit representation.

Chicago is the only school district in Illinois with an appointed school board but opponents of the bill note that many major cities nationally are governed by their city or a combination of the city and state.

Three of four rating agencies rate CPS general obligation bonds at junk although the ratings have been on the rise over the last few years due to increased state aid and new city tax levies. CPS operates on a $6.9 billion budget this year and has about $8 billion of debt.

Beyoncé, a $100,000-a-night suite and a red carpet of influencers: Dubai basks in its booming economy
Rumor has it that Dogecoin could shift to proof-of-stake — What does that mean for miners?
Price analysis 2/1: BTC, ETH, BNB, XRP, ADA, DOGE, MATIC, DOT, LTC, AVAX
Munis firmer across the curve, outflows return
This Week’s Hidden Gems: (BABY)(COHR)