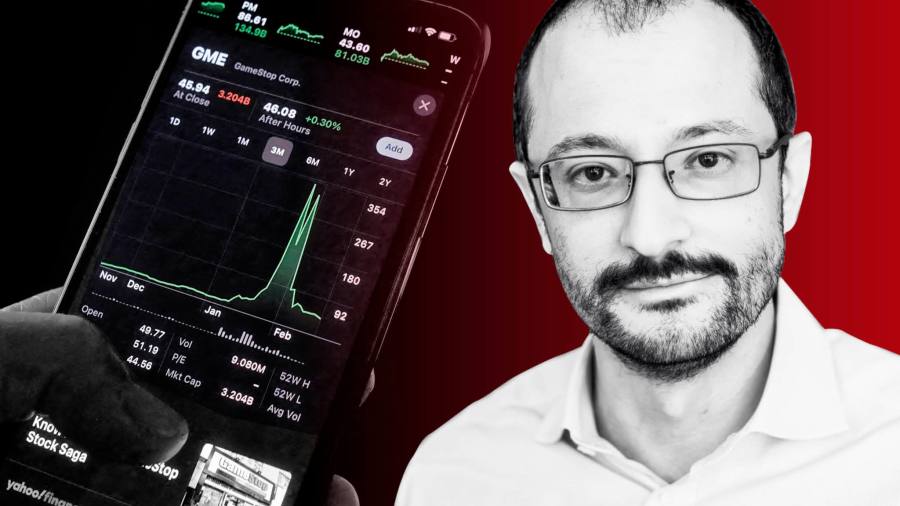 The surge of trading in offbeat stocks is duping inexperienced investors in to high costs and a battle with Wall Street that they cannot win, according to the founder of one of the largest trading firms in the world.

Zero-commission trading helps to build an illusion that amateur investors have never had it better, Alex Gerko, co-chief executive of London-based XTX Markets, told the Financial Times in an interview.

But the way retail brokerages sell on their customers’ orders and a “very poor benchmark” mean that the smallest investors together shell out billions of dollars in hidden costs every year when buying or selling US equities, he explained.

“The GameStop episode made it obvious that the retail part of the market is particularly broken,” Gerko said, referring to the huge spike in the console store chain’s shares in January. “The incentives are there to create a lot of churn in very illiquid stocks, which is exactly what we are seeing this year.”

On the face of it, the GameStop frenzy was an unprecedented victory of young amateur traders over Wall Street professionals including some hedge funds that had been betting against the company. But Gerko thinks the reality is the opposite. “If you think of zero commissions, on paper it sounds great — trading was expensive and now it’s free. That’s obviously complete nonsense,” he said.

Part of the allure of retail platforms such as Robinhood is that they provide zero-commission trading. But Gerko said charges are hidden in the difference between the buy and sell price, the so-called spread, meaning brokers and market makers want clients to trade shares where this gap is widest, such as in illiquid stocks that are generally thinly traded.

“If a market maker earns a certain spread from retail flow, and then pays some percentage of that spread to the retail broker . . . you end up with a perverse incentive to ensure that the end clients trade stocks with very wide spreads,” he said.

The 41-year-old mathematician’s criticism comes as shares in cinema chain AMC Entertainment and other meme stocks, popular with retail investors in online forums such as Reddit, are soaring once again. AMC shares have jumped by more than 500 per cent in the past month to last week’s highs before moderating, gaining a further boost after the company promised retail investors additional perks — including free popcorn.

Gerko said brokerages and other intermediaries were among the beneficiaries of these share price pops, particularly as retail brokers often sold their clients’ trades in bulk on to market makers, which then aimed to secure favourable prices for clients. This practice, known as “payment for order flow” (PFOF), earned US brokers $2.9bn in 2020 without charging amateur investors commission upfront, and has attracted attention from regulators.

“In the current ecosystem there is somehow enough . . . [to] leave market makers with billions of dollars of revenue,” he said. “So where does this money come from? The retail investors. When people are claiming that they provided X billion dollars of price improvement last year, the question is whether any of that price improvement is real. And whether it’s something they should be proud of.”

The Russian-born UK citizen started his career as a currencies trader at Deutsche Bank. In 2015, he set up XTX Markets and built one of the largest computer-driven trading firms in the world. He has kept a low profile while amassing more wealth than some household names. Last year he contributed more to the UK’s tax coffers than the Duke of Westminster, according to the Sunday Times, making him the 13th largest individual taxpayer in the country.

His firm does not employ human traders but relies purely on computer models to buy and sell assets in a bid to generate profits. It does not engage in payment for order flow. The firm is the third largest dealer in global currency markets and handles 13 per cent of European equities traded on exchanges. Since 2019, the company has also been in US stock markets.

A recent paper from consultancy BestX Research said price improvement on retail market orders averaged about 25 per cent, compared with the standard benchmark. But the paper added that this in reality was “akin to getting a 30 per cent discount on an item after the shopkeeper raises the price by 40 per cent,” because the benchmark covers only a small slice of the market.

Broker Robinhood and the two of the largest US market makers, Citadel Securities and Virtu, have defended the PFOF model, arguing there is no evidence that payment for order flow harms investors. But newly sworn-in chair of the Securities and Exchange Commission, Gary Gensler, said he would make the PFOF model a focus of future work.

Gerko said one solution could be to strip PFOF out of the process, and instead to feed retail traders’ orders on to exchanges where they would match off against each other or market makers would compete to execute the deals. He also bats away criticism that his proposals are self-serving, noting that XTX advocates for market structure changes in all markets, even where they play a dominant role already, such as currency markets.

Even with those kinds of changes, however, he doubts that retail investors can emerge victorious from another round of battle with sophisticated trading firms. “Retail investors have managed to cause some pain to one hedge fund. I can assure you in the long run it won’t be retail participants winning this game, that’s just impossible.”