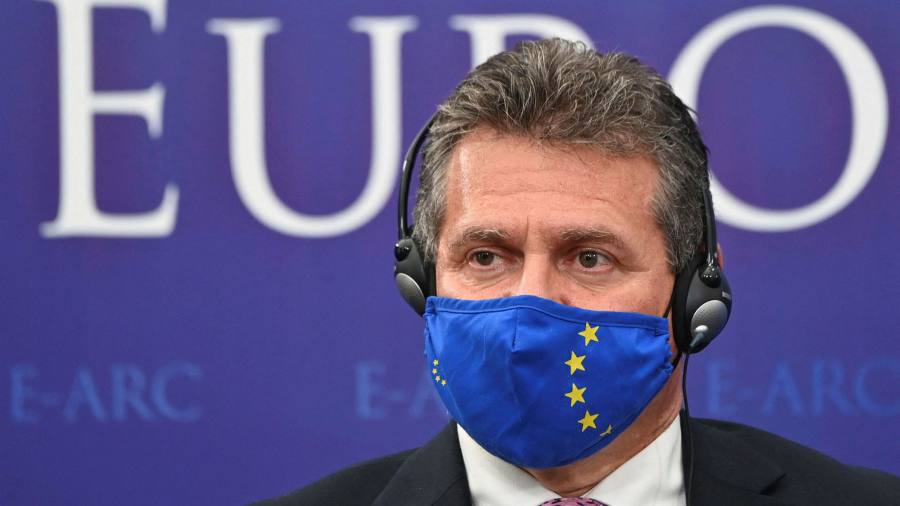 Brussels has warned that it is ready to intensify retaliation against the UK if Boris Johnson further postpones applying the two sides’ deal on Northern Ireland, in another sign of strained relations ahead of talks this week.

EU Brexit commissioner Maros Sefcovic, writing in the Daily Telegraph, warned that “unilateral action” by the UK to ease the requirements of the post-Brexit trading arrangements for Northern Ireland would meet a firm response.

“The EU will not be shy in reacting swiftly, firmly and resolutely to ensure that the UK abides by its international law obligations,” Sefcovic wrote, as he urged joint solutions to irritants that have emerged with the post-Brexit trade rules since they were applied in Northern Ireland at the start of this year.

Sefcovic’s comments are the latest intervention in tetchy exchanges between the EU and UK in recent days over who is to blame for difficulties experienced with the so-called Northern Ireland protocol, which preserves open trade on the island of Ireland by requiring regulatory checks on goods between the region and Great Britain. Irritants have ranged from hurdles for the distribution of medicines to burdensome new paperwork for imports of food and live animals.

Both Brussels and London are also aware that time is pressing to find solutions given the imminent expiry of a grace period allowing imports of sausages and other chilled meats from Great Britain to Northern Ireland — the exemption from the EU’s usual requirement for such products to be frozen when they enter the bloc is set to expire at the end of June.

Sefcovic said he hoped the two sides could rebuild co-operation over the protocol at meetings in London on Wednesday that he will hold with his UK counterpart Lord David Frost. “It is clear that this week will be a defining one for consolidating trust between the European Union and the United Kingdom,” he wrote.

George Eustice, environment secretary, said he believed US president Joe Biden would appreciate that it was unacceptable for there to be a ban on moving chilled meats between Great Britain and Northern Ireland, just as he would not accept such a ban on meat movements between Texas and California.

Eustice told the BBC that such a ban was “bonkers” and said he believed Biden, who arrives in Britain on Thursday ahead of the G7 summit in Cornwall, would see there were two sides to the argument over the NI protocol.

Johnson discussed the situation in a call yesterday with French president Emmanuel Macron, with the UK prime minister emphasising “that both the UK and the EU have a responsibility to find solutions to address the issues with the protocol”, according to the official UK readout of the call.

Frost earlier this week accused the EU of “legal purism” in its demands for how the protocol should be applied. The EU has said that Britain is failing to implement basic parts of the new arrangements, such as building and properly staffing border control posts for goods, and sharing data with Brussels.

“We see numerous and fundamental gaps in the UK’s implementation,” Sefcovic wrote.

An EU official on Monday noted that Brussels’ efforts to coax the UK into action had not worked despite the bloc launching legal action against London earlier this year for delaying the application of some protocol rules.

“The infringement procedure that we launched in March and the arbitration procedure, which is based on what we consider to be a lack of good faith on the UK side, have not proven to be sufficient, and therefore we need to consider other tools,” the official said.

Options for Brussels could include holding back co-operation in areas of UK interest — diplomats have pointed to market access for financial services as an obvious candidate.

“If we truly believe in the Good Friday Agreement, as the British government does, and peace in Northern Ireland, that means we have to make the NI protocol work properly,” Eustice said.

“We will be working with the EU trying to get solutions to this.” He added: “We want to engage with the EU on a sensible basis.”